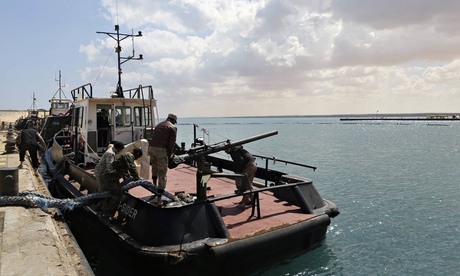 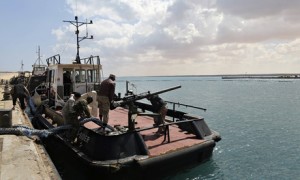 The ousting of Libya’s prime minister, Ali Zeidan, who fled to Europe earlier this week, has set off fighting between eastern and western regions that threatens to divide the country. Rebels in the east of the country demand a larger share of the income generated from Africa’s largest oil reserves. The conflict-torn country’s former PM, who was popular with western diplomats, was sacked by the Islamist-led congress on Tuesday after failing to prevent a tanker bound for North Korea from loading oil from a port controlled by rebels in the eastern region. Fearing arrest following his dismissal, Ali Zeidan escaped from Tripoli aboard a private jet in the middle of the night, leaving behind a fractured government and a country in turmoil, fighting over its rich oil resources.
Libya has Africa’s largest oil reserves, but production has dropped dramatically since summer 2013, when a self-declared government was formed eastern part of the country, which also set out to blockade key oil terminals. The line of argumentation used by the rebels to support their separatist agenda revolves around the idea that while much of Libya’s oil is produced in the east, the revenue flows to Tripoli in the west. As a consequence, the rebels’ argument goes, the western part of the country deserves a larger share of the income in return for lifting the blockade.
All in all, oil revenues are all but the only source of income for Libya that – some three years after the country’s former strongman Gaddafi was toppled in the Arab spring revolution – is marred by militia violence, a sluggish economy and pockets of Islamist radicalism. It is quite telling that just a day after Zeidan’s removal, the powerful militia from a city of Misrata situated 187 km to the east of Tripoli launched an offensive to retake the blockaded oil terminals, storming the base of an army special forces unit. Meanwhile, the international response has so far been muted with Britain and the US only issuing statements denouncing federalist attempts to sell oil independently from the central government. Commenting on the escalating security situation and growing political instability in the country, a British security expert warned that “with control of the central government and Libya’s oil at stake, all these groups, rivalries and alliances of convenience are coming to the fore. What happens next will be violent.”

North Africa Post's news desk is composed of journalists and editors, who are constantly working to provide new and accurate stories to NAP readers.
NEWER POSTTunisia Asks Its Citizens for Help amidst Budget Crunch
OLDER POSTEgypt: Ambassadors’ joint statement for respecting rights and liberties in the country