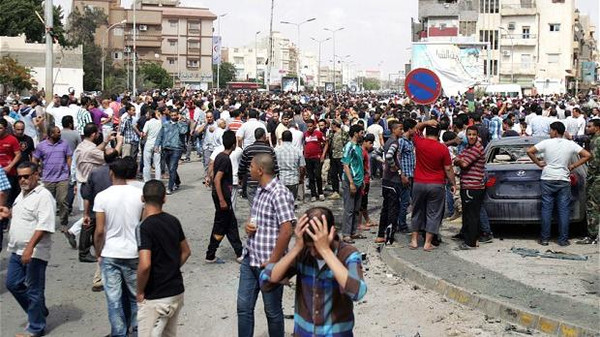 Fighting has intensified in Benghazi as the Islamists and Khalifa Haftar’s forces continue to fight for control over the town. Smoke was seen coming from a ship in the port. Amidst the fighting between rival armed groups, Prime Minister Omar al-Hassi of the government based in Tripoli has called for “new elections” to be organized because the Tobruk government has lost its legitimacy and also accused the “Westerners” of playing the wait-and-see game.

The battle for Benghazi started a couple of weeks ago and has already left more than 200 people dead. Residents of Sabri, a district near the port, were urged to evacuate the area by the army because Islamists groups have “barricaded themselves among civilians.” Colonel Ahmed al-Mesmari, armed forces general staff spokesman, said the army is cooperating with Haftar “to clear the zone of armed Islamist groups.”

A shell has hit a naval ship at the port as fighting includes tanks and aircrafts. Warplanes could be heard firing into the port area. The Benghazi port serves as an important gateway for food, wheat and fuel supplies to eastern Libya.

Meanwhile, Prime Minster Hassi of the Tripoli government has claimed that the Tobruk parliament “has lost its legitimacy” and “new elections” supervised by “local councils” should be organized in order to end the ongoing war between the “enemies of the revolution” and “revolutionaries” during an AFP interview. Hassi said that “the revolution has been stolen. We are in the process of getting it back again.” He added that the “Westerners are waiting to see who is victorious in the field, even in defiance of democratic choices, to build relationships with him, as it happened in Egypt” before accusing the UAE and Egypt of “proxy war” in Libya.