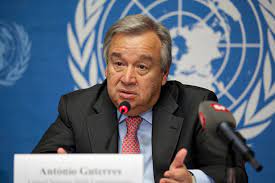 UN Secretary-General Antonio Guterres has called on all parties to the Sahara conflict to resume the UN-led political process to reach a solution to this regional dispute.

“It is time for the parties to understand the need for dialogue to reach a solution” to the Sahara issue, which has been going on for several decades, said the UN Chief during his latest press conference held in New York.

“It is in the interest of all to resolve once and for all” this dispute in a region which is facing extremely serious security challenges and growing terrorism threat from the Sahel, he added.

Due to these challenges, “it is time for the parties to understand the need for a dialogue to reach a solution and not simply maintain an indefinite process with no hope of resolution”, underlined Mr. Guterres.

His remarks come following the first tour made by his personal envoy for the Sahara Staffan de Mistura to the region for consultations with Morocco, Algeria, Mauritania and the polisario-controlled camps in Tindouf, Southern Algeria.

UN Security Council resolution 2602, adopted on October 29, 2021, calls on the parties to the Sahara conflict to continue their commitment to the roundtable process, in a spirit of realism and compromise, to achieve a realistic, pragmatic, sustainable political solution based on compromise.

Morocco has reiterated commitment to the resumption of the political process under the exclusive auspices of the UN to achieve a political solution on the basis of the Moroccan Autonomy Initiative and within the framework of the roundtables format gathering the “four participants”.

North Africa Post's news desk is composed of journalists and editors, who are constantly working to provide new and accurate stories to NAP readers.
NEWER POSTRyanair to operate flights to Marrakech and Agadir in Summer
OLDER POST2nd Postponement of Arab Summit due in Algeria, Major Setback for Ruling Military Junta