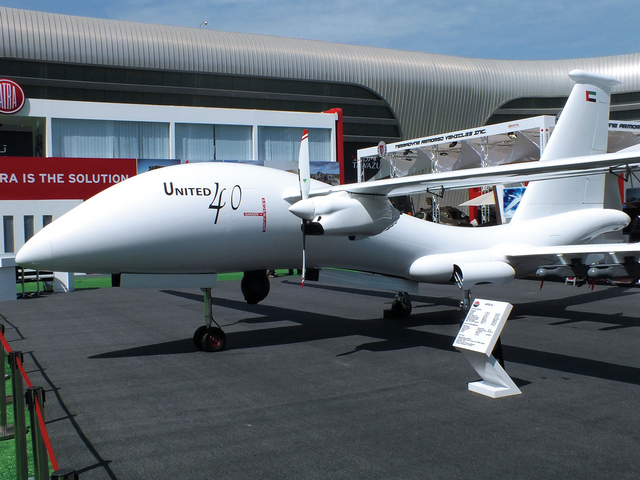 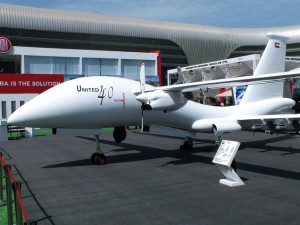 Algeria has set its eyes on the Adcom Systems Yabhon United 40 Block 5 Unmanned Aerial Vehicle (UAV) at the ongoing Dubai Air Show 2013. Algiers wants to boost its medium-altitude long-endurance (MALE) intelligence, surveillance, and reconnaissance (ISR) capacity. The Yabhon United 40 Block 5 is considered to be likely included in its fleet very soon.
The Chief Executive Officer Ali Al Dhaheri who also doubles as the general designer of the company is optimistic that a deal will be concluded due to the interest manifested by the delegation. Although the Yabhon United 40 Block 5 is meant for collecting intelligence, it can also be equipped with arms to execute certain weapons. CEO Dhaheri stopped short of saying what Algeria’s desires are.
The rise of al-Qaeda militants and increase trafficking in the vast Sahara desert has become an area of concern for Algeria. It wants to assert its authority in the south and assure its security with the help of the UAVs and track its targets.
Local reports have also stated that the government is interested in the US-made General Atomics Aeronautical Systems Incorporation (GAASI) Predator/Reaper platform. Should Algeria prefer the Yabhon United 40 Block 5, developed from a platform in the United Arab Emirates, it will become the second country after Russia to acquire it.
Performance specifications released at the Dubai Air Show give the Yabhon United 40 Block 5 a cruise speed of 120-200kph, an endurance of over 100 hours, and a service ceiling of 26,000 ft. In terms of payload, the aircraft is fitted with synthetic aperture radar (SAR), terrain avoidance systems and a gimbaled camera. It can carry 1,050 kg on its four under-wing hard points and has a 6-unit rotating dispenser mounted in the fuselage.