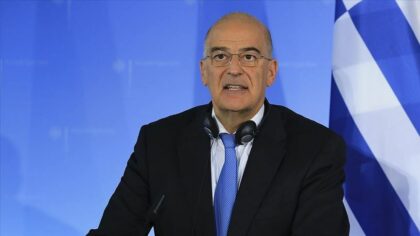 The foreign minister of the UN-backed Libyan Government of National Accord (GNA) has castigated the visit to his Greek counterpart, Nikos Dendias to the rival east-based administration, in reaction to GNA’s November maritime deal with Turkey.

Dendias during the surprise visit in Benghazi met with Khalifa Haftar, retired army General currently leading an offensive to seize capital Tripoli from the GNA and Abdullah es-Sinni and Abdulhadi al-Havic, officials of the Haftar-backed GNA rival.

Greece, Egypt, Cyprus, Israeli, Egypt and the Eastern Libyan administration have opposed a maritime MoU signed on Nov. 27 between the GNA and Ankara. The agreement extends Turkey’s maritime borders and allows conducting economic and military activities in Libyan territorial waters. The agreement forces other countries to seek Ankara’s approval prior to any activities in the maritime zone.

Following the signing of the agreement, Haftar vowed to sink any Turkish ship sailing in Libyan waters. His naval forces on Saturday reportedly seized a Grenada-flagged ship with a Turkish crew. The vessel was arrested on the coast of the eastern city of Derna.