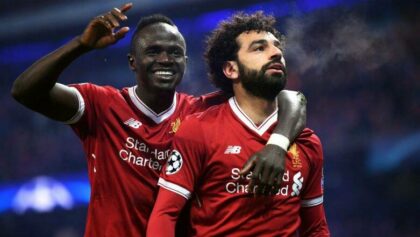 The Confederation of African Football (CAF) has released its three-man shortlist for the 2019 Player of the Year awards.

Manchester City star Riyad Mahrez who captained Algeria to Nations Cup success in Egypt in 2019 and Liverpool duo Sadio Mane of Senegal and Egypt’s Mohamed Salah are on top of the list.

Mane and Salah have helped Liverpool win the FIFA Club World Cup.
The women shortlist has also been narrowed down to three names with Ajara Nchout of Cameroon and Valerenga joined by Asisat Oshoala of Nigeria and Barcelona and South Africa’s Beijing Phoenix FC star Thembi Kgatlana.

The event will celebrate African footballers and officials who have distinguished themselves during 2019. There will also be several new award categories in recognition of exceptional contributions to African football and inspiring individuals.

“The final phase of voting for the men’s and women’s African Player of the Year, as well as the male and female Coach of the Year, will be selected by Head Coaches/Technical Directors and Captains of senior national teams from CAF Member Associations,” read part of the statement on the CAF website.

The winners will be announced during the CAF Awards ceremony on January 7 in the Egyptian resort of Hurghada, the football body said.