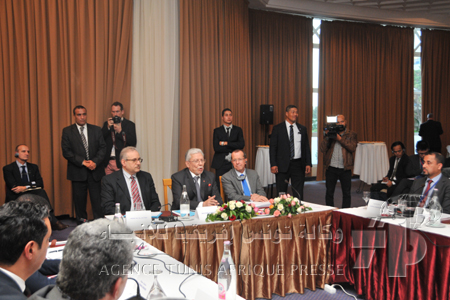 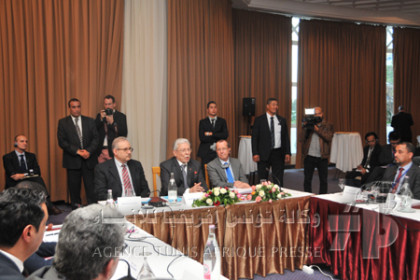 Tunisia and the UN once again called on Libyan political protagonists to urgently ink the UN-brokered National Dialogue Agreement in the face of growing instability and the giant strides of the Islamic State in the North African country.
Meeting all factions for the first time, Head of the UNSMIL Martin Kobler reminded the protagonists of the urgency to endorse the pending agreement while also stressing that it will not be possible to bring changes to final document brokered after one year of negotiation. He pointed out that doing so will be like opening “Pandora’s box”.
He also told media after the meeting that he received “positive” feedbacks from the participants who shared his views.
“I felt the consensus on two things: the urgency to come to a rapid signature of the Libyan political agreement because of several reasons: the expansion of DAESH the terrible humanitarian situation, the question of the resources the country has, which should not be exploited,” he said
“The second consensus is not to open now the text of the agreement, to go ahead on the basis of the agreement.”
The German diplomat also indicated all factions present in Tunis agreed to ink the agreement and leave the UN to lead the process as opposed to the recent landmark development in the process when rival sides namely the General National Congress (GNC) and a team of the House of Representatives (HoR) signed a deal known as Declaration of Principle therefore blowing up the UN long efforts.
Kobler also announced that date for the signing of Agreement will be determined on Sunday at Rome international conference on the Libyan crisis.
His comments were also mirrored by Tunisia Foreign Minister TaiebBaccouche who also threw Tunisia’s support behind the UN and reminded the protagonists that they will be accountable to their people for the current situation and it is urgent for them to find consolidated and concerted solutions to problems plaguing their country.
“Libyans have a moral and historical responsibility to settle their disputes, find a way out of this crisis and benefit of international guarantees to allow them to form a government of national accord,” he said.
Baccouche went re-iterating Tunisia’s determination and impartiality to help end the havoc in Libya which has significant and negative impact of Tunisia’s security and fragile democracy with series of terror attacks perpetrated by IS-Libya-trained militants crossing in Tunisia.
He also rejected any foreign and military intervention in Libya in view of weeding out IS and other terror groups as well as smuggling networks.