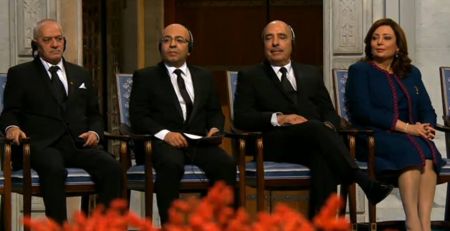 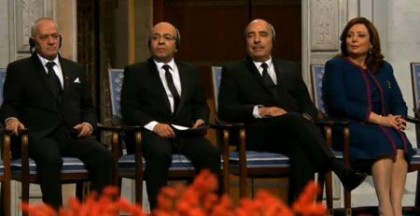 Months after being crowned winner of 2015 Noble Peace Prize, Tunisian Dialogue Quartet Thursday in Oslo solemnly picked up the award paying tribute to freedom, democracy and rights fighters in Tunisia from all social classes and reminded the international community of the urgency to build a self-determined Palestinian state as a major step in the fight against terrorism.
The group was represented by HoucineAbassi (Tunisian General Labor Union, UGTT), Mohamed Fadhel Ben Mahfoudh (Tunisian Order of Lawyers, ONAT), Abdessattar Ben Moussa (Tunisian Human Rights League, LTDH) and WidedBouchamaoui (Tunisian Confederation of Industry, Trade and Handcrafts, UTICA) at the solemn gathering which graced by the presence of King Harald of Norway and the Norwegian government.
The winners in their remarks paid tribute to the Tunisian Revolution and an inspiration to all the people of the world to legitimate rights.
They also thanked political stakeholders, who chose the path of consensus, women, youth, men, culture unionists, human right defenders, security forces and the national army.
“The National Dialogue has never been easy, but despite the difficulties, the transition process was able to succeed,” they said.
“The achievements accomplished on the path of democratic transition push the Quartet to exert more effort to entrench them, all the more that they are aware of the ongoing challenges and threats against the country.”
In face of the growing terror in the world, the Quartet argued that world needs to promote dialogue between civilizations, peaceful and diversified co-existence or chooses to embark on fight against terrorism with no clear end and sure results.
To that the group pointed out that to end terrorism in the world, the international community should assist Palestinians to build their state at the side of Israel.
“Today, we need to accelerate the elimination of hot spots all over the world, particularly the resolution of the Palestinian issue,” HoucineAbassi, the secretary general of the Tunisian General Labor Union, said on behalf of the group.
This would be done by giving “the Palestinian people the right to self-determination on their land and (to) build their independent state,” he continued followed by a thunderous applause from the audience.
The group was also praised for their significant contribution in building democratic institutions in new nascent Tunisia freshly breaking with oligarchy and on the verge of collapsing into chaos following the Jasmin revolution.
The Chair of the Norwegian Nobel Committee Kaci Kullmann Five said the Quartet deserves the Prize for its “decisive contribution to the building of a pluralistic democracy in Tunisia.”
For Kullmann, Tunisia has also shown the world that Islamist and secular political movements can negotiate with one another to reach solutions in the country’s best interest, reports say.
The group received gold medals for their impressive and decisive contribution.