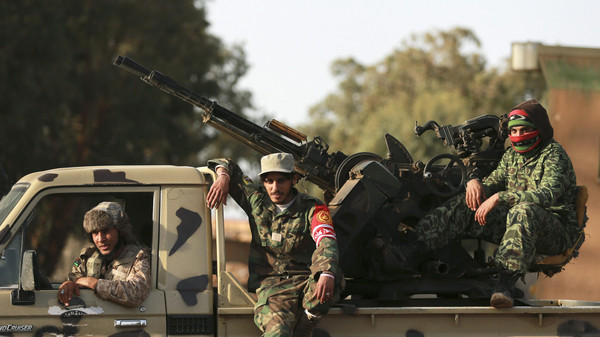 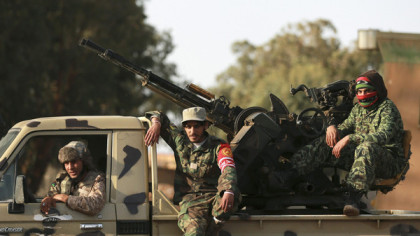 Members of Libyan pro-government forces, which is backed by the locals, look on in an army camp, in Benghazi February 1, 2015. Violent clashes between Libyan pro-government forces and the Shura Council of Libyan Revolutionaries, an alliance of former anti-Gaddafi rebels, who have joined forces with the Islamist group Ansar al-Sharia, have occurred in the areas surrounding the camp. Picture taken February 1, 2015. REUTERS/Esam Omran Al-Fetori (LIBYA – Tags: CIVIL UNREST POLITICS MILITARY)

The Tobruk and Tripoli governments have oriented their guns towards extremist groups in territories under their respective control although the rivalry between them continues.

Forces of the internationally recognized Tobruk government are fighting Majlis al-Shura, an umbrella for armed groups including Ansar al-Sharia, in the eastern city of Benghazi while Tripoli is battling it out with the fighters based in the central city of Sirte who have pledged allegiance to the Islamic State of Iraq and Levant (ISIL).

Fighting has been tense with 10 people killed and around 40 people injured according to figures presented by officials.

A military spokesman of the Tobruk forces said they registered 9 casualties with at least 30 injured while Jamal Zubia, a spokesman for the Tripoli-based government, stated that one of their men was killed and seven were injured on Wednesday.

Despite the number of casualties, army commander Khalifa Haftar claimed that his forces are having the upper hand against Majlis al-Shura in Benghazi. Fighting is still continuing in the city and a military spokesman said that the extremists have been driven away from several government buildings.

Meanwhile in Sirte, ISIL is claiming that it is dominating the forces of the Tripoli government and it tweeted that it has taken over a camp of the Misrata forces in southeast Sirte publishing pictures purportedly taken inside the camp. The Tripoli forces fighting ISIL are from Misrata. ISIL fighters have in recent months claimed responsibility for several attacks including the storming of a Tripoli hotel and the murder of dozens of Egyptian and Ethiopian Christians.