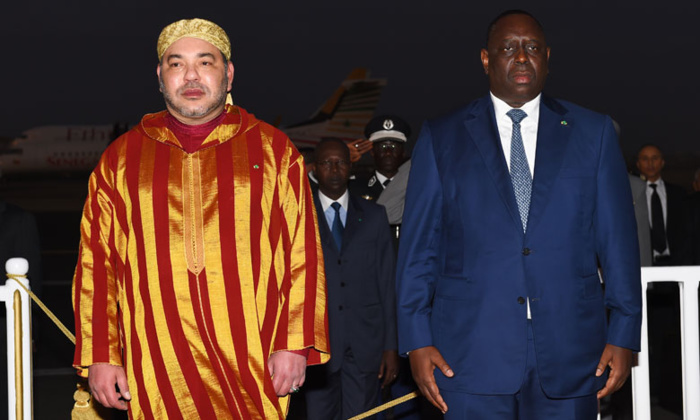 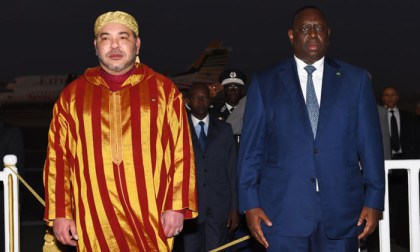 King Mohammed VI of Morocco has kicked off his new African tour, the third in three years, by a week-long visit to Senegal where he arrived on Wednesday.

The King’s keenness to visit Senegal whenever he tours the region reflects the importance he grants to the longstanding, historical relations binding the two countries.

President Macky Sall of Senegal described the visit as “an extremely important visit” that translates “the Senegalese-Moroccan exception.”

“It is a longstanding, strong relationship, based on mutual trust,” said President Sall on Tuesday upon return from a summit of the Economic Community of West African States (ECOWAS) in Accra, where he has been appointed president of this organization grouping 15 countries.

“Our two countries are bound by a very strong relationship based on history, geography, kinship and political alliance,” he said.

The current royal visit to Senegal is placed under the sign of the strengthening of bilateral trade and investment, as evidenced by the large ministerial and business delegation accompanying the king and by the planned signing of some fifteen agreements in the sectors of finance, energy, agriculture, and social housing.

A joint group set up to give a new impetus to Senegalese-Moroccan cooperation will meet for the first time on the sidelines of the visit.

According to a Senegalese presidential source, quoted by the local media, the King’s schedule also includes field visits to a number of projects, including the rural electrification project in Louga. The King will also take part in the official launch of the development work of Soumbedioune Bay in Dakar. The project is meant to fight coastal erosion and promote tourism.

Several Moroccan investors are operating in Senegal where the Moroccan know-how is sought in many sectors including banking and insurance, real estate, rural electrification, health and pharmaceuticals, and transport.

Military and educational cooperation between the two States is equally strong, Morocco having trained, since the early years of independence, Senegalese army officers in its military academies. The first batch of Senegalese cadets graduated from the Royal Military Academy of Meknes as early as 1969. Likewise, thousands of Senegalese students have graduated from Moroccan universities and higher institutes over the years as more than 550 Senegalese are granted Moroccan scholarships every year.

Religion also holds a very important place in Moroccan-Senegalese relations, the two countries being linked by the Tijanya brotherhood, an Islamic sunni order that advocates tolerance and moderation and that attaches great importance to culture and education. The founder and spiritual leader of the Takika, Sidi Ahmed Tijani, is buried in the Moroccan city of Fes.

The King of Morocco is expected to leave Dakar on May 27 to carry on his tour in Côte d’Ivoire, Gabon and Guinea-Bissau and demonstrate again his firm commitment to have his country play its full part in the future of the continent and be a platform for regional economic integration.