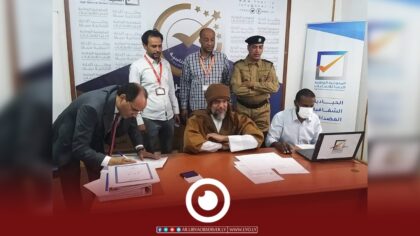 The prosecutor of the Libyan military court Sunday ordered the head of the Electoral commission to freeze the presidential candidacies of Saif al Islam Gaddafi and rebel army commander Khalifa Haftar both wanted for alleged serious crimes against the state.

The order came in a letter issued by the office of the prosecutor to Imad al-Sayeh few hours after the son of the former Libyan leader Muammar Gaddafi submitted his bid for the December 24 elections.

The prosecutor demands to halt the acceptance of the candidacies of the two figures or will hold Sayeh legally responsible in the event of any violation of the demand.

Haftar, controlling much of the country’s eastern regions, is touted to run for the elections.

In September rebel army commander stepped down from the top leadership of the so-called Libyan National Army in favor of his Chief of General Staff, Lieutenant-General Abdel Razek Al-Nathouri for three months, a move considered as an indication of Haftar’s intention to run for the presidency.

Shortly after Saif al Islam submitted his candidacy for next month presidential election, the International Criminal Court (ICC) indicated that the former right hand of late Muammar Gaddafi is still wanted for crimes committed during the 2011 NATO-backed revolution that ousted and assassinated his father.

Fadi Al-Abdullah, spokesman of the court, confirmed that the arrest warrant for Saif Gaddafi remains in force and that his candidacy for the presidential elections in Libya has not and will not change the court’s legal position on the request for his imminent arrest and trial, Libya Observer reports.

“We have followed Saif Al-Islam Gaddafi’s submission of papers for his candidacy; however, we have no dealings in political matters, notwithstanding, an arrest warrant in his name remains in force,” he added.