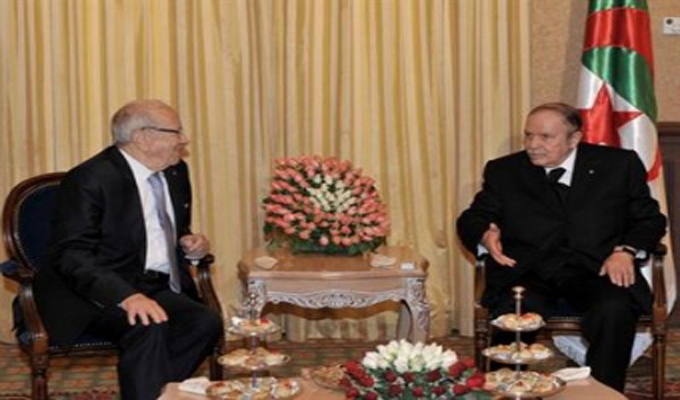 Tunisian president Beji Caid Essebsi has began on the 5th February a two-day state visit to Algeria at the invitation of the Algerian Head of State, President Abdelaziz Bouteflika. 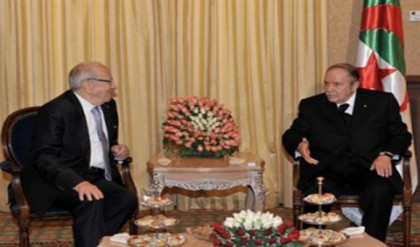 Accordding to a statement from the presidency of Algeria, released by Algerian official news agency APS, This two-day visit will provide an opportunity to the two heads of state to consider ways and means to strengthen the historical bonds of brotherhood and active solidarity between the Algerian and Tunisian peoples brothers and revitalize cooperation between the two countries to benefit their mutual development and service to building the Arab Maghreb Union.

According to the same source, the two presidents will also discuss about “the construction of the Arab Maghreb,” and the coordination between the two countries on issues of common interest” related to Maghreb and Sahel regions.

Greeted in the Thursday morning by members of the Algerian government, including the president of the Council of the Nation Abdelkader Bensalah and Prime Minister Abdelmalek Sellal, Beji Caid Essebsi made his first visit abroad as the new president of Tunisia.
For his first day visit, the Tunisian president Beji Caid Essebsi said that his visit to Algeria was “excellent in every way.”

“My visit to Algeria is excellent in every way. I found my friend Bouteflika as I have always been anxious to talk about important issues and attentive to the evolution of the Algerian-Tunisian relationships.” said Mr. Essebsi to the press after his meeting with the Algerian President, Abdelaziz Bouteflika.
The two countries have agreed to supply the border towns of Algerian natural gas, especially Sakiet Sidi Youcef, Tabarqa Ain Darham initially.

For transport, the two countries have agreed to explore opportunities for joint exploitation of certain airlines between Annaba, Constantine and Setif in Algeria and Tunis Tabarqa and, besides the possibility to revive the railway line between Annaba and Tunis.
The Tunisian president has announced that the 20th Session of the Joint Commission will be held in the coming days in Algeria, adding that “everything that has been agreed upon will be implemented on the ground.”
Algeria has actually strongly supported Tunisia in its efforts to get out of the transition period that lasted four years and devoted to democratic practices as expected. The exchange of official visits between the two countries has strengthened cooperation in all levels, and provides “advice” to Tunisia about the post-revolution political transition.

North Africa Post's news desk is composed of journalists and editors, who are constantly working to provide new and accurate stories to NAP readers.
NEWER POSTWhy Good French-Moroccan Relationships are so Disturbing?
OLDER POSTUN thanks Mauritania for supporting the Malian brothers to find a peaceful