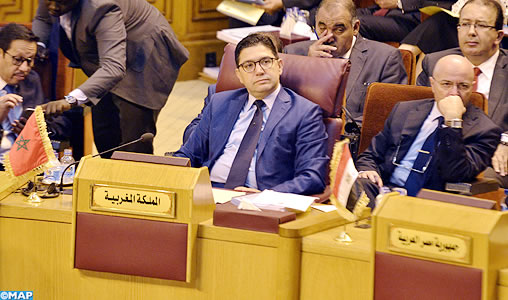 Morocco reiterated its call for a result-oriented Arab summit that breaks away with narrow calculations.

Speaking at a meeting of Arab League foreign ministers in Cairo, foreign minister Nasser Bourita urged Arab states to work together with a shared vision to safeguard the security, stability and territorial integrity of Arab states.

Time is up for strengthening Arab cohesion and solidarity in a difficult international context, he said.

Special attention was attached by the minister to the Palestinian cause whose settlement requires adopting realistic and more efficient approaches instead of empty slogans and political manipulation.

In this respect he said Morocco- under the leadership of King Mohammed VI- spared no effort to stand by the Palestinian people and their right to an independent Palestinian state with eastern Jerusalem as its capital in line with the borders of 1967, living side by side with Israel in peace and security, he said.

The upcoming Arab Summit due in principle on Nov 1-2 in Algeria has been delayed multiple times as Algiers sought to impose its own agenda on the summit including its pro-Iranian and pro-Syrian regime stands.

Algeria has also cut ties with Morocco further complicating its mission as a host state of the Arab League and undermining its rhetoric of seeking to unite Arab states while on the ground sowing discord and divisions within the Arab family.