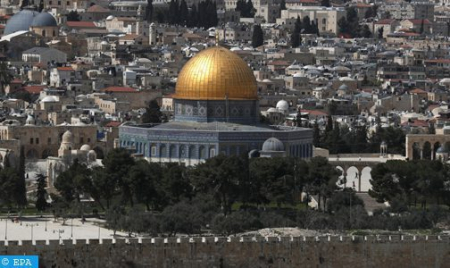 The Arab Ministerial Committee in charge of the action to stop Israeli measures in occupied Al-Quds hailed, on Tuesday in Cairo, the constant efforts undertaken by King Mohammed VI, Chairman of Al-Quds Committee, in the defense of the Holy City.

The Ministerial Committee, which held its fourth meeting ahead of the Council of the League of Arab States at the level of foreign ministers, welcomed the projects carried out by Bayt Mal Al-Quds Asharif Agency, the executive arm of the Al-Quds Committee, to keep the Al Quds inhabitants on their land and support their resistance.

The Ministerial Committee also welcomed the resolution of the Council of Arab Foreign Ministers on “Israeli developments and violations in occupied Al-Quds”.

In a report to the Ministerial Committee, the Arab League Secretary General, Ahmed Aboul Gheit, highlighted the direct mediation of Morocco, under the leadership of King Mohammed VI, Chairman of the Al-Quds Committee, and the United States, which resulted in an agreement for the opening, without interruption, of the Allenby/King Hussein border crossing linking the West Bank to Jordan.

In addition to Morocco, the Arab Ministerial Committee in charge of the action to stop the Israeli measures in occupied Al-Quds includes Saudi Arabia, Jordan, Palestine, Qatar, Egypt, the United Arab Emirates, Tunisia, Algeria, as well as the Secretary General of the Arab League.