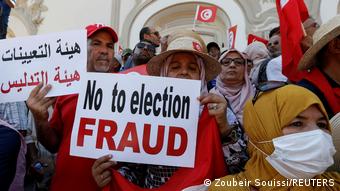 Algeria, first country to back unpopular July 25 referendum in Tunisia

Algerian President Abdelmadjid Tebboune Sunday threw weight behind his Tunisian counterpart Kais Saied who is harshly criticized at home and abroad for legitimizing his seizure of all major powers last year.

Tebboune told local media that Saied represents “the legitimate side” in Tunisia.

Tebboune is the first president to publicly support Saied in the wake of the July 25 referendum which was boycotted by majority of voters.

Saied put a new constitution to the referendum. The independent electoral body, ISIE, put the turnout at 30 per cent and at over 90 per cent of the casted ballots in favor of the unpopular constitution.

Major political parties and most civil society groups boycotted the referendum arguing it is unconstitutional and a way to validate the putsch conducted by President Saied on July 25 last year when he snatched all major powers in the North African country.