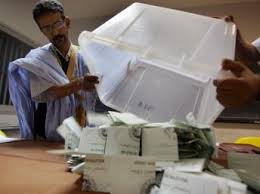 Presidential elections in Mauritania are scheduled to take place in June according to a government decree despite differences between the opposition parties and the ruling party. The opposition has doubts over the transparency and the credibility of the elections. The legislative elections held at the end of last year were boycotted by some parties and the government was accused of vote rigging.
The decree stated that the “electoral college is convened on Saturday June 21, 2014, and in the event of a second round, on Saturday July 5.” Registrations for desiring candidates will end on May 7. Campaigns will be from June 6 to June 19.
President Mohamed Ould Abdel Aziz, is expected to vie for a second term in office although there have been no public announcement from his party the Union of the Republic. He came to power though a coup d’état in 2008.
The statement came as surprise for some opposition parties who have been engaged in discussions with the government over the reform of elections rules. Talks have been going on for weeks but agreements on dates and conditions under which the election will be held were not reached.
The Executive Director of the opposition Forum for Democracy and Unity, Moussa Fall, said the government’s decision to publish such a statement meant that they withdrew from the talks. He stressed that they are determined to continue the negotiations because “there are still no clear guarantees on the ground rules and transparency of the elections.”
Birame Ould Dah Ould Abeid, a renowned anti-slavery activist and a slave descendant, is determined to become president and did mention in the beginning of the year that he plans to contest as an independent candidate.
Slavery still exists in Mauritania despite being banned.