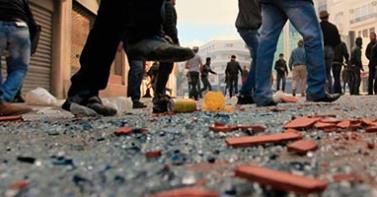 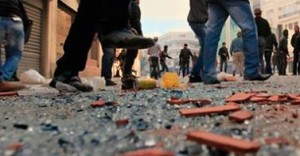 For two days, since Wednesday (April 9), Rouhia, a governorate of Siliana, has seen bloody clashes between Tunisian security forces and the religious extremists close to Ansar al-Chariaa movement resumed. The clashes were due to the arrest of sixteen “wanted takfiris” on Monday night. After religious extremists close to Ansar al-Chariaa movement reportedly attempted to storm the Rouhia polic station following El-Maghreb prayer, the security forces responded with tear gas to disperse the attackers, whereby these religious extremists hit back with stones. Radio station Mosaique FM reported that protesters threw stones and molotov cocktails at the police.
According to reliable sources close to the government, the security forces and the national guard supported by the special brigades blocked the main road leading into Rouhia city and the neighboring areas, Monday night, before conducting raids on houses occupied by religious extremists. The security operation ended up with the arrest of several “takfirist” individuals who were, as Tunis Afrique Presse (TAP) reported, “former fighters from the wars in Iraq and Syria.” These are the latest arrests in a campaign by Tunisian security forces against what the government describes as groups connected to Ansar al-Sharia. Earlier this month, ten people were arrested after an explosion injured two people believed to be making bombs in the large industrial city of Sfax.
These clashes are just the latest part of Tunisia’s ongoing fight against religious extremism that has earlier focused on regaining control of the mosques across the country. More than 1,000 mosques fell into the hands of extremists after the Arab Spring, interior ministry spokesman Mohamed Ali Aroui told the media last month. Mr Aroui also noted that “they kicked out the imams appointed by the religious affairs ministry on the grounds that they were remnants of the former regime.” While stressing that Salafist imams are inciting violence against the security forces, the interior ministry official also warned that “they also call for jihad in Syria and try to spread extremist ideas from abroad into Tunisian society.”

North Africa Post's news desk is composed of journalists and editors, who are constantly working to provide new and accurate stories to NAP readers.
NEWER POSTOPEC prepares meting ahead of production increment
OLDER POSTLibya’s Deepening Instability: A New Islamist Emirate in the Making?