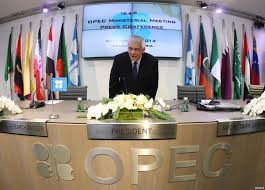 The Organization of Petroleum Exporting Countries (OPEC) plans to gather more products from three member countries but is yet to give any exact mean to gather these productions. They are Iraq, Iran and Libya. The organization has drawn plans to meet on June 11 at Vienna to analyze the incumbent 30 million barrels of production per day. It has bypassed the production-quota system to suspend discussion about production with Iraq until 2015.
Increment of production is expected from Iraq and Iran to join Libya, the country that plays a vital role in production for the organization.  Anticipations are high for the lift in production after the peace agreement between the government of Libya and the rebels, who controlled the eastern oil rich areas.
OPEC has no difficulty to take up an adjustment in production from Iraq and Iran, who faced sanctions for many years now over its nuclear program. 30 million barrels are expected to be produced a day throughout the year due to the high rise in demand for oil in the world.
Information gathered shows that 30.3 million barrels were produced per day in March. According to the Secretary-General, Abdulla al-Badri, their ideas on how to manage adequate production from these three countries are yet to be designed. After several years of conflict and under sanctions, the 5th country in the world with the largest oil reserves, Iraq, is receiving help from various investors to reconstruct its energy industry.
The present pleasing oil prices after a considerable rise was helped by Iraq’s huge increase in production and Libya, which has regain some oil rich areas after reaching an agreement with the eastern rebels.