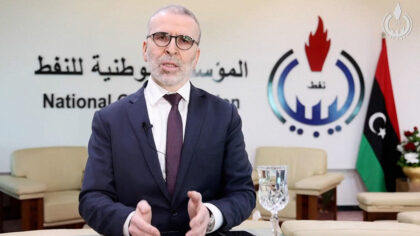 The Libyan ministry of Oil and Gas Monday said the decision to dismiss the Chairman of the National Oil Corporation (NOC) Mustafa Sanallah is still in effect and pending legal measures despite attempt by Prime Minister Abdul Hamid Dbeibah Sunday to dissipate feud between Mohamed Oun and the NOC boss.
The ministry, Libya Observer reports, added that it is doing its job despite hurdles and hindrances, saying its recommendations for replacing the board of directors of the NOC are still in place.
Oun’s department last week announced Sanallah’s suspension and reference to investigation for violations of the Ministry’s policy of travelling abroad without prior authorization.
Sanallah in a video post refused to step down and ripped the minister apart as he threw Oun’s integrity into question. Dbeibah met with both rivals Sunday in a move to amend fences. He in a statement issued by his office gave instructions to solve the problems the hindrances that emerged between the ministry and the NOC and stress the importance of not repeating them for any reason.
“The creation of the Ministry after six years of individual functioning of the institution requires administrative and technical organization,” Dbeibah said in the statement.