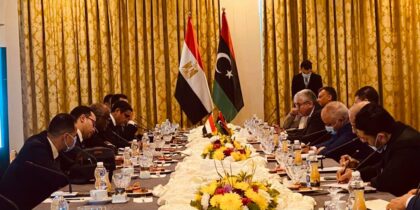 A top Egyptian delegation met Sunday in Tripoli with members of the UN-backed Government of National Accord (GNA), an unprecedented meeting, seeking re-establish ties between the two countries.

The gist of the discussion revolved around resumption of cooperation between Tripoli and Cairo, including the re-opening of the Egyptian embassy in Tripoli. Talks also discussed ways to find “urgent solutions to resume Libyan flights to Cairo.”

The Sunday visit is unprecedented as Egypt is known as a major backer of GNA’s rival administration located in the East and supporter of rebel Gen. Khalia Haftar.

Libya has been divided and subject to foreign influence through opposed governments.

While Egypt, UAE, Russia, France back Haftar, Turkey, Qatar and in some extend Italy are known as the GNA’s international allies.