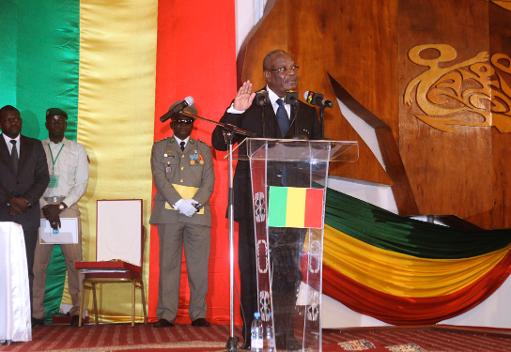 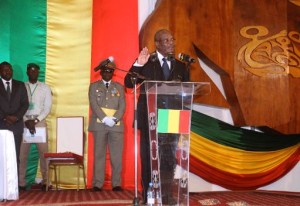 King Mohammed VI of Morocco participated Thursday in the inauguration ceremony of the new president of Mali Ibrahim Boubacar Keita, along a number of other heads of state, including France’s François Hollande.
The presence of the Moroccan King at this ceremony did not go unnoticed because it was the first time that the king attended personally a presidential inauguration ceremony, because it was his first visit to Mali and because it brought back to minds Morocco’s contribution to the settlement of the Malian crisis that erupted following the March 2012 coup and the ensuing occupation of large parts of Northern Mali by Jihadist groups and franchises of Al Qaeda.
Morocco which was holding the rotating chairmanship of the UN Security Council in December 2012 actively contributed to the adoption of the resolution authorizing the deployment of a military force in Mali to fight the occupying terrorist groups. When on the basis of this resolution French troops, with the support of Chadian troops, started fighting the Jihadis, Morocco did not hesitate to grant France all the logistical backing it needed to chase out the rebels and end the crisis that was tearing apart the West African country for months and that was threatening to spread throughout the Sahara-Sahel region.
During and after the crisis, Morocco impressed the international community by its commitment to invest human and financial resources to contribute financially to the reconstruction of the country and assist and improve the daily lives of the populations of the war-torn country. It organized several humanitarian assistance operations to relieve the plight of refugees and displaced persons and to provide medical aid to needy people.
This outstanding involvement in the liberation and reconstruction of Mali translates the culture of active solidarity enshrined as a fundamental value in the Kingdom’s relations with African countries and shows the full extent of the King’s keen interest in bolstering Morocco’s cooperation with other African nations and, beyond bilateral relations, in establishing a new and modern process of inter-African development.
Since he came to power in 1999, King Mohammed VI paid visits to a score of African Sub-Saharan states, including strategic countries such as Mauritania, Senegal, Congo, Gambia, Burkina Faso, Guinea, Niger and others. These visits are part of Morocco’s endeavors and strategy to support the political, economic, financial and cultural development of the continent and to enhance the kingdom’s role at the level of regional security.
Morocco’s centuries-old historical, cultural, and economic ties thus grew stronger and its presence in the continent was further consolidated as Government-to-Government strategic cooperation was enhanced and as the Moroccan private sector, finding incentives in the personal commitment of the king, started investing in African countries.
Thus, many Moroccan large firms have opened branches or set up joint ventures in some 23 African countries. These include Banks (BMCE, Attijariwafa Bank, Banque Populaire,) real estate developers (Addoha, Alliances Développement Immobilier,) insurance companies (Saham Group), mining and industrial companies (Managem group, OCP) and telecom companies (Maroc Telecom).

North Africa Post's news desk is composed of journalists and editors, who are constantly working to provide new and accurate stories to NAP readers.
NEWER POSTMauritania and EU improve fisheries agreement
OLDER POSTLibya to use its financial reserves before November