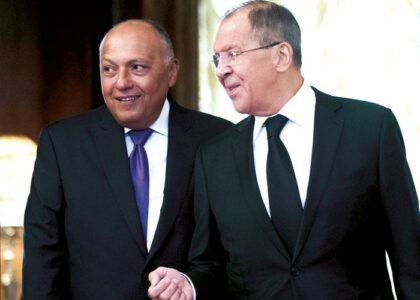 Egypt and Russia Tuesday agreed to avoid aggravation of the crisis in Libya where the two countries are finger-pointed for supporting retired army commander Khalifa Haftar who has been pushing to seize capital Tripoli from the UN-backed Government of National Accord (GNA).

Egypt’s Foreign Minister Sameh Shoukry reportedly held a telephone conversation with his Russian counterpart Sergei Lavrov over the situation in Libya and urged for further efforts to reach a comprehensive settlement of the crisis in the oil-rich country.

The North African country has been dogged since 2011 in the wake of the fall and murder of former ruler Muammar Gaddafi by rivalries between the GNA and its staunch opponent administration in the east backed by Haftar.

The retired army commander in April launched an offensive to seize Tripoli. He is backed by Egypt, the UAE and Russian mercenaries.

Tensions in Libya heightened after Turkey last month signed a maritime agreement with the GNA and vowed this month to send military troops to prop up the weak UN-sponsored administration in Tripoli.

Egypt has criticized the maritime agreement, which expands Turkey’s maritime borders into Libyan waters and plans to deploy forces to the North African country.

Last week, Russia said it will discuss Turkey’s plans for military deployment next month, following a telephone conversation between the two countries’ leaders.