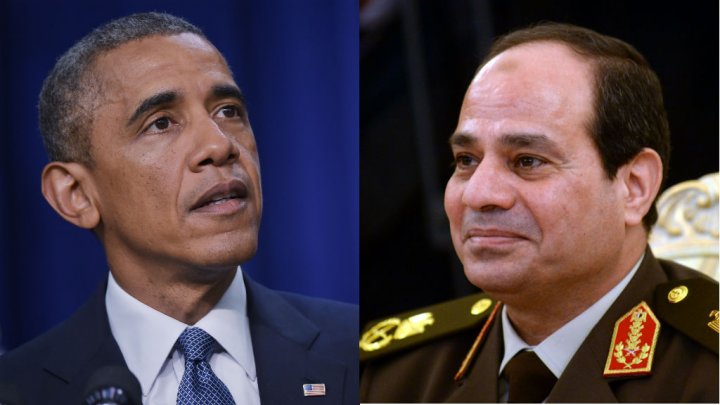 The relation between Cairo and Washington seems to be on the right footing after Egyptian Presidential Spokesman, Alaa Youssef, announced that President Abdel-Fattah El-Sisi will be meeting with his homologue from the US to clear the air about Egypt’s situation. He said “the reality” will be told to President Obama in order to clear the doubts and the opinion his administration have of Egypt.

Ahead of the announcement of the scheduled Thursday meeting with Obama, President El-Sisi told the United Nations General Assembly during his speech that the world “has started to grasp reality and understand why Egyptians revolted against the extremism that wanted to break the unity of the nation.” His words could be considered as a justification of the coup d’état he led against President Mohamed Morsi of the Muslim Brotherhood. El-Sisi said his government is determined to establish “a civil democratic state” with a developmental plan that will continue until 2030.

President Erdogan of Turkey alleged that the El-Sisi led government is illegitimate and urged the UN not to support coup leaders because they disrespect the choice of the voters.

Spokesman Youssef said the meeting between the two presidents will last for an hour. He added that “El-Sisi’s meeting with Obama is a positive step from the latter’s side. The American President usually does not hold one-on-one meetings during the UN General Assembly sessions.” The meeting will be a venture for El-Sisi to “remove ambiguity” and “explain the reality” of what’s happening in Egypt after last year’s ouster of Islamist president Mohamed Morsi.

Washington was not pleased with the undemocratic removal of Morsi. Tension strained the relations between the two countries forcing the US to suspend some of its military aid to Cairo. The relations are slowly improving.