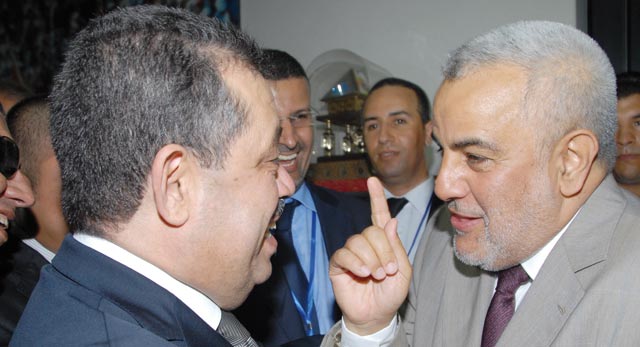 Istiqlal Withdrawal from Governing Coalition: Does Chabat want to become Caliph instead of the Caliph Benkirane. 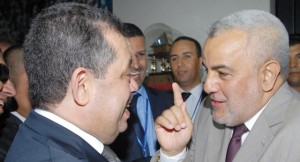 The National Council of the Istiqlal Party decided on Saturday to withdraw from the Moroccan coalition government led by the Islamist Party for Justice and development (PJD).
The decision was not a surprise to analysts who see in it the normal outcome of the fierce and controversial opposition the Istiqlal Party’s Secretary General Hamid Chabat has been voicing to the government ruling PJD and to its leader and head of the government Abdelilah Benkirane since he was elected to lead the Istiqlal Party in September 2012.
Chabat’s decision, formally said to have been democratically made by the IP National Council, gave rise to a number of questions as to the impact of this decision on Morocco’s political and geo-strategic landscape and whether it will be followed by a mere cabinet reshuffle in what would be a minority government, by the formation of a new coalition with other parties that are currently in the opposition, or by early parliamentary elections.
Whatever the scenario to be chosen, the decision has shaken the political strata and raised fears to see the country plunge in instability like what is happening in neighbouring Tunisia, Libya or Egypt.
These fears are probably the main reason having prompted the King of the country to intervene and ask Chabat in a phone talk to maintain his party’s ministers in the government to manage daily affairs until he returns from a private trip abroad.
The IP, the second force at the House of Representatives with 60 members out of 395, holds sixl ministerial portfolios in the cabinet, including those of Economy and Finance, Education, and energy and mines.
Immediately after the phone talk, the IP executive committee announced that it will follow the royal instructions to secure the country’s stability and supreme interests.
Commentators depict in the phone talk a clear royal message urging the Istiqlal to calm down its passion and to try to find common grounds with its ally in the coalition instead of withdrawing from the government, as such withdrawal may trigger a serious political crisis in the Country.
Hamid Chabat, often described as a troublemaker on the Moroccan, political arena, has repeatedly criticized the Head of the government Abdelilah Benkirane for what he sometimes called “his inability” to lead the government, or “his inefficiency” to address the country’s “serious economic and social problems.” At some other times, he blamed Benkirane for making unilateral decisions without prior consultations with other components of his government team. He also happened to accuse Benkirane and his inexperienced PJD ministers of making “unpopular” moves that are harmful to Moroccans’ interests or purchasing power.
During the celebration of Labor Day on May 1st, Chabat who is at the same time the leader of his party’s trade union, the UGTM, was more ferocious in his critics of the government action than any opposition party.
The PJD, which has been in the opposition for years, is leading the government after a historic victory in the parliamentary elections held in November 2011.
As the PJD did not win an overwhelming majority with the 107 seats it gleaned, it formed a coalition with three other parties, namely the Istiqlal (60 seats), the Popular Movement (33 seats) and the Party of Progress and Socialism (18 seats).
If the Istiqlal party actually withdraws from the coalition, the PJD will probably seek alliances with other opposition parties. However, analysts rule out a possible alliance with the three parties that rank right after the Istiqlal, namely the National Rally of Independents (RNI/52 seats), the Authenticity and Modernity Party (PAM/47 seats) and the Socialist Union of Popular Forces (USFP / 39 seats) in view of the tense relationship between the PJD and each of these parties.
The Constitutional Union (UC) is a possible ally but with its 23 seats, the coalition will not have the required 198 seat majority as it will only have 181 seats. So a new coalition with a comfortable majority seems quite complicated to form even if all the remaining nine parties represented at the Parliament join the coalition with their 16 seats.
Organize early elections is not a solution either, since the operation is rather costly and the financial crisis makes it difficult to embark on additional unexpected expenses.
Some analysts suggest that the IP ministers withdraw or freeze their membership in their Party to continue holding their positions in the cabinet.
For the time being all options remain on the table.
However, While Chabat’s followers claim that his opposition to the PJD is dictated by his nationalism and keenness to prompt the government to be more dynamic and more efficient in the management of the state affairs, some commentators explain Chabat’s sensational decision as a mere tactic to enable the Istiqlal Party have larger negotiation room and a maneuver to impose ministers of his choice in the governing coalition, instead of the current ministers that were appointed by his predecessor, Abbas El Fassi.
Meanwhile, some other sides explain his fierceness by his overwhelming ambition to be at the helm of power and to become Caliph Chabat instead of Caliph Benkirane.

North Africa Post's news desk is composed of journalists and editors, who are constantly working to provide new and accurate stories to NAP readers.
NEWER POSTSamsung factory to supply ME and Africa from Egypt
OLDER POSTLibya to remove oil and food subsidies