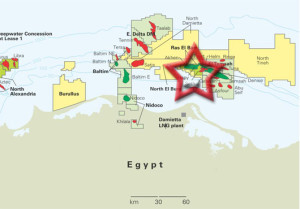 Eight oil and gas exploration projects have been awarded by Egypt to several companies in a statement released from the ministry of petroleum. The decision followed the reception of 13 offers after an international call for tender concerning prospective acreage.
Among the companies are British Petroleum (BP), International Egyptian Oil Company (IEOC), a subsidiary of Italian oil major ENI, and Pura Vida Energy. The projects are located in the Mediterranean Sea, off Egypt’s northern coast. The companies are expected to pay a total amount of $73.2 million for their licenses and a minimum investment of $1,2billion in all the projects.
The Egyptian authorities were forced to extend the deadline in the past due to the little interest it attracted from the tenders. State-owned Egyptian Natural Gas Holding Company (EGAS) scheduled the deadline for bidding to the 13th of February from the 14th of November. It had announced the bidding in June for the exploration blocks in the Mediterranean and Nile Delta basins. Egypt is looking to cash in on growing interest in the Mediterranean play and offers less political risk for would-be explorers than Israel, Cyprus or Lebanon, with the latter’s first exploration round attracting a surge of applications from international companies.
The positive reaction obtained from the postponement by the Egyptian Natural Gas Holding Company has paid dividend to the country’s plan as it continues to struggle with its current terms. Energy demands have been on the rise and the government is finding it difficult to provide fuel subsidies, which according to the oil minister, will cost above $17.4 billion in 2013.