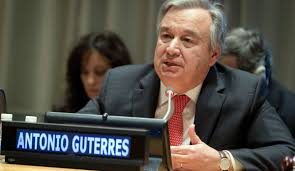 “We hope that all Member States support the UN’s effort”, Spokesperson for the UN Secretary General, Stéphane Dujarric, said Tuesday in his daily press briefing in New York.

In his response to a question on the African ministerial conference convened in Marrakech to support the UN political process on the Sahara, the UN spokesperson said that the efforts made by the UNSG personal envoy for the Sahara, Horst Köhler, are mandated by the Security Council, noting that Mr. Köhler has just finished a latest round of discussions with the parties last week in Geneva.

Thirty-seven African countries attended the Marrakech ministerial conference to confirm their support to the UN-led process to settle the regional dispute over the Sahara.

They stressed the need for backing the UN process and refraining from pushing the African Union into stands that block efforts towards a political, lasting and mutually acceptable solution in line with the Security Council resolutions.

The meeting was also a chance to highlight the African Union decision 693, adopted last July in Nouakchott at a summit. The decision states clearly that the Sahara should be tackled only within the UN framework, barring the road to adversaries of Morocco’s territorial integrity within the African Union who sought to create a parallel mechanism.