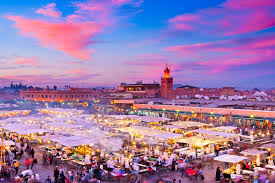 Marrakech has once again confirmed its standing as Morocco’s tourism hub. TripAdvisor has just ranked the Ochre City as the ninth best destination for travelers in 2019, ahead of cities like Dubaï (10th), Prague (11th) or New York (13th).

TripAdvisor has published Tuesday (March 26) its list of countries acclaimed by users of the platform in 2019.

“The international excitement of the marriage of Prince Harry and Meghan Markle has put London in the spotlight, attracting travelers to the city and ultimately placing it at the top of the list,” says TripAdvisor.

The British capital has thus dethroned Paris, which ranked first in 2018. Last year, Marrakesh was ranked 8th, ahead of Istanbul (9th) and New York (10th).

It is worth noting that Marrakech is the only African city to have made it to the top 10.

The travel site states that the winning destinations were determined using an algorithm based on reviews and ratings of hotels, restaurants and experiences in destinations around the world over a twelve-month period.

The methodology takes into account the quality and volume of notices sent to these destinations.

Whereas tourists’ overall assessments tend to give a positive nod to Moroccan tourism, it is Marrakech which is often, and rightly, considered as the country’s ultimate touristic paradise that generally makes it to top global destinations for travelers.