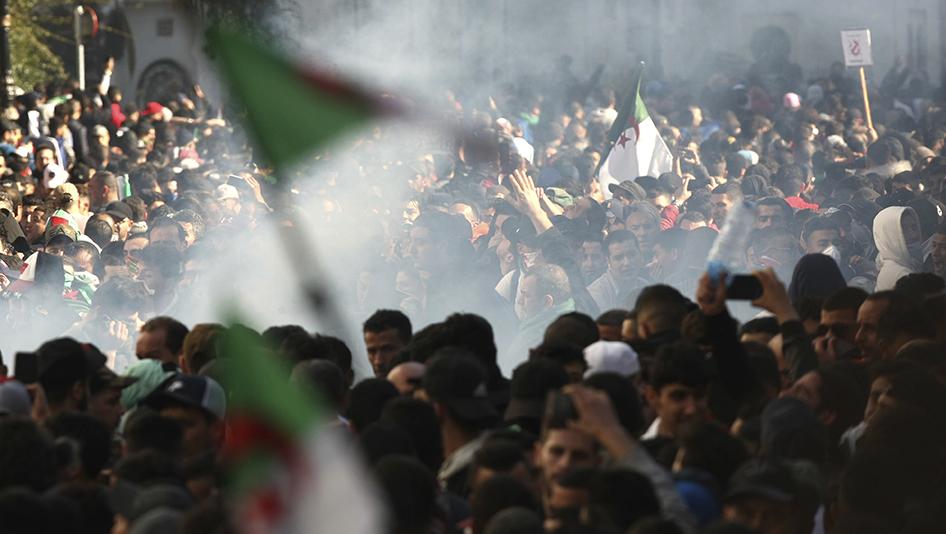 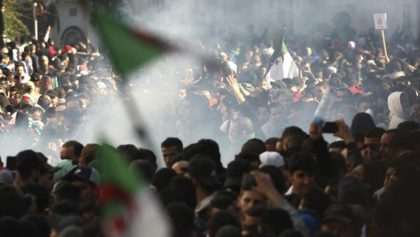 Protests are growing against a fifth term for ailing President Abdelaziz Bouteflika. So far, one protester was killed and dozens were injured in clashes with policemen in the capital. Anger is building up across the country threatening the fragile social peace and the country’s stability as time and money run out.

Officials are toughening their response with a military intervention on the horizon as protests continue to bring together thousands.

Maintaining Bouteflika on the helm of an opaque regime signals the strong latent disagreements between the different clans in the regime. 2014 elections offered them a chance to buy time but apparently no agreement was reached.

Algeria is in a transition period in which the youth that have only heard of the civil war of 1990s is no longer afraid to express its ambitions to democracy and dignity comparing the underdevelopment of their country to the well-off non-oil countries of Morocco and Tunisia.

The EU, Morocco and Tunisia are all preparing for the worst case scenario in case the regime fails to respond to the calls of the people.

Waves of refugees and sea crossings are to be expected in case the Algerian regime fails to appease the anger of the street.

Bouteflika’s candidacy is only the spark that triggered the large-scale protests. Other factors, including high inflation, poverty, corruption fuel discontent.

The economy slowed to a near standstill over the past half decade. Annual GDP growth came in at a paltry 0.8% in the most recent reading down from a robust 3.5% to 4% yearly rate as recently as 2017.

Unemployment remains particularly high among the youth, reaching 26.7%. Youth in marginalized areas away from the urban centers have disproportionately borne the brunt of the static labor market.

In recent months, riots have regularly took place in the oil and gas rich southern towns over economic marginalization and inadequate public investment. The recent violent riots over tax hikes in the historically rebellious region of Kabylie, notably in the large coastal city of Bejaia highlight the risks for Algerian authorities from altering its subsidy system in a country where social peace hinges on the distribution of oil rent through subsidizing key commodities.

As it heads straight to insolvency, Algeria insists on shunning foreign debt as it resorts to unconventional measures involving the Central Bank money printing to delay an impending bankruptcy in the absence of genuine reforms.

According to revelations made by Prime Minister Ahmed Ouyahia this week, the total use of unconventional financing, since the launch of this policy, amounted, up to 31 January 2019, to the equivalent of $55 billion. The amount corresponds to almost 33% of Algeria’s GDP.

Since the oil plunge started three years ago, Algeria sought to reduce its tremendous budget deficit internally, by tapping in its foreign exchange reserves, nearly depleting its sovereign wealth fund, known as the Revenue Regulation Fund, and trying to issue bonds to its citizens and commercial sector.

Algeria’s foreign exchange reserves dropped to $88 billion by the end of 2018 down from $194 billion in 2014, barely enough to cover 18 months of imports.

Algeria is now running among the largest trade deficits in the emerging world with 12.5 % in 2018.

The proposed reforms in the new economic growth model seem to ignore the widespread corruption that affected almost all large-scale projects in Algeria.

Algeria’s flagship development project, the East-West Highway, fell victim to the national malaise. Originally allocated a budget of $6 billion, rampant graft saw the project eventually completed for a price of almost $15 billion, making it mile for mile the most expensive road in the world.

After decades of expensive oil, the country failed to diversify its economy away from oil and gas, which represent 98% of total exports. After 20 years of Bouteflika in office, Algeria faces the same dilemma of the beginning of the 1990s when the country depleted its reserves and had to resort to foreign debt before plunging into a decade of devastating civil war.

Instead of blaming the current crisis on a lack of reform during the era of expensive oil, Bouteflika and his cronies rather ascribe the crisis to external factors triggering a “severe decrease” of revenues and necessitating “reforms” that should “be accepted by citizens”.

The superficial nature of the reforms that aim at polishing the façade is similar to the regime’s democratic façade where a group with vested interests in maintaining the authoritarian status quo and rent economy maintain a firm grip on the government machinery by ruling without actually governing.

In the Doing Business Index, Algeria is ranked as an investment unfriendly country along with war-torn states such as Libya, Syria and Iraq.

The recent protest will further complicate political instability and the uncertainty surrounding the successor to the ailing president Bouteflika and will also contribute to undermining the flow of foreign direct investments, badly needed to diversify the economy.

Some analysts argue that Algeria’s attempts at diversifying the economy have failed because of a lack of clear-sighted strategy to prompt the private sector and attract FDIs.

Algeria’s oil and gas producing capacity is shrinking every year. International Think Tanks have been worrying in recent years over Algeria’s declining gas production coupled with a surge in domestic consumption would diminish exports.

Since 2007, Algeria’s consumption of oil and natural gas has risen by more than 50 percent while its oil production has fallen by 25 percent. With less oil available for export, the government’s revenues have been hit hard

Algeria is expected to be left with only 15 bcm/year to export by 2030. In a lower production or high demand scenarios, it will cease exporting all together, therefore importing gas beyond any such a point.

By the end of Bouteflika’s fourth mandate in 2019, the country will have spent $1000 billion in 20 years, thanks to non-renewable sources. This huge resource could have financed all the development needs of the African continent. Instead of being invested in developing Algeria, these colossal hydrocarbon revenues were used to entrench the authoritarian status quo creating propitious conditions for a looming destructive chaos.

The protests are also taking part against the backdrop of insecurity amid the surge of trafficking and terrorist groups in the Sahel and war-torn Libya. If dissent is not contained in Algeria through genuine reforms at the political and economic level, the situation could degenerate with the vast Algerian desert and mountains offering propitious conditions for the resurgence of terrorist groups eager to exploit any vacuum of power.