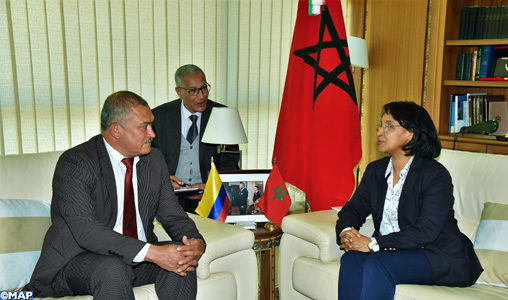 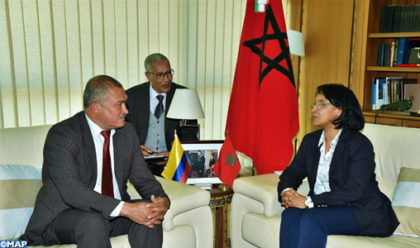 At a meeting held in Rabat with Secretary of State for Foreign Affairs Mounia Boucetta, a Colombian MP delegation, led by chairman of the Foreign Affairs Committee Anatolio Hernandez Lozano, recalled the adoption by the Colombian Congress of a resolution expressing full support to Morocco’s sovereignty over the Sahara, and affirming that Rabat is a strategic ally of Bogotá.

The Colombian MPs also commended the important role and the noteworthy contributions made by King Mohammed VI for the development and peace in Colombia, saying that the friendship ties with Morocco, the only country that opens the doorway of Africa to Colombia, must be further strengthened through new cooperation agreements.

The Colombian MPs delegation also held separate meetings with Speakers of the two chambers of the Moroccan parliament, who have both praised the Colombian parliament for its backing to Morocco’s territorial integrity and to the autonomy plan for the Sahara, describing the position expressed through the resolution adopted last December as noble and historic.

The autonomy plan was recognized by the international community as “a serious, realistic and credible” offer for reaching a final solution to the Sahara regional conflict.

The two sides stressed the need to engage in joint reflection on ways to consolidate bilateral and multilateral parliamentary cooperation, through a tripartite mechanism (Morocco-Africa-Colombia). The Colombian MPs were also called to adhere to the ambitious initiative launched by the Moroccan parliament on the creation of an Africa-Latin America parliamentary forum, to serve as a platform to uphold the legitimate aspirations of the peoples of the two continents.

The Colombian delegation’s visit is part of the celebration of the 40th anniversary of the establishment of diplomatic relations between Morocco and Colombia. It aims to strengthen bilateral relations, exchange experiences in several areas and build on the strategic location of the two countries to deepen their partnership, as Morocco is the gateway to Africa and the Euro-Mediterranean area, while Colombia is a launchpad for penetrating South America.