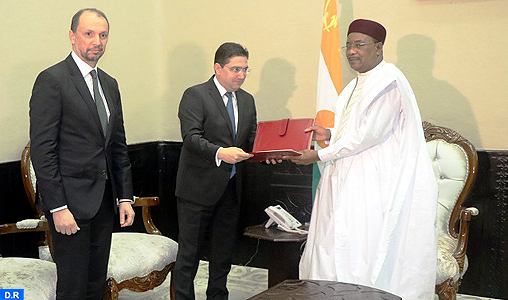 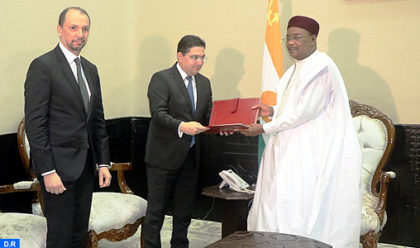 The Royal message deals with “bilateral relations and the means to strengthen them in all areas,” Morocco’s Minister of Foreign Affairs Nasser Bourita, who conveyed the message to President Issoufou, told reporters following the audience.

The message also tackles regional issues and the means to address the challenges of security, stability and climate change, Bourita added, noting that relations between Rabat and Niamey are “very strong today”.

Bourita took part Monday in Niamey in the 1st Conference of Heads of State and Govt of the Sahel Climate Commission, which was set up in November 2016 in Marrakech at the Africa Action Summit, held at the initiative of King Mohammed VI.

In its final communiqué issued following this summit meeting, the Commission hailed “the pioneering role” played by King Mohammed VI and his vision for a strong and resilient Africa as well as the leadership and availability of Morocco.

Morocco “has always worked for ambitious South-South cooperation to guarantee the harmonious and sustainable development of Africa,” the communiqué added.

The Heads of State and Government of the Sahel also hailed the Sovereign’s initiative leading to the creation of three Climate Commissions in Africa.

In a message he addressed to the first Summit Conference of the Sahel Climate Commission, King Mohammed VI announced that Morocco will finance the feasibility studies to finalize the Climate Investment Plan for the Sahel region.