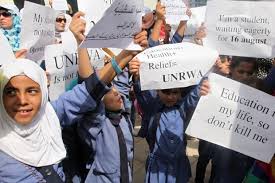 The European Union and the United Nations Relief and Works Agency for Palestine Refugees in the Near East (UNRWA) signed on Wednesday a Joint Declaration on EU support to UNRWA for the period 2017-2020.

They also announced the signature of the financial agreement for the EU contribution to the UNRWA Program Budget for 2017, which covers the Agency’s essential services in terms of education, health care, and relief and social services.

The 2017-2020 Joint Declaration strengthens the political nature of the EU-UNRWA partnership and reaffirms the European Union’s commitment to promoting the rights of Palestine refugees and supporting the long-term financial stability of the Agency in a context of intensified budgetary constraints and operational challenges, the EU said in a press release.

According to the Joint Declaration, the EU will essentially contribute to the funding of quality education for 500,000 children, primary health care for more than 3.5 million patients and assistance to over 250,000 acutely vulnerable Palestine refugees.

On the margins of the signing ceremony, the EU and UNRWA announced the disbursement of a €82 million commitment to the UNRWA Program Budget for 2017. Among others, this will help pay the salaries of 32,000 local UNRWA staff, most of whom are Palestine refugees themselves, and contribute to the running costs of close to 700 UNRWA schools and 140 UNRWA health-care centers.

The High Representative of the EU for Foreign Affairs and Security Policy, Federica Mogherini, one of the signatories of the Joint Declaration, recognized the essential role of the Agency in the Middle East. “With its tireless work, UNRWA keeps supporting Palestine refugees, providing education, promoting socio-economic development and stability in the Middle East,” she said. “The international support is key to UNRWA: the European Union will keep investing in one of the pillars of its Middle East peace policy.”

Another signatory of the Declaration, Commissioner for European Neighbourhood Policy, Johannes Hahn renewed the EU’s commitment to support UNRWA in its further reform efforts, building on the important work underway, to ensure the provision of quality core services to vulnerable Palestine refugees.