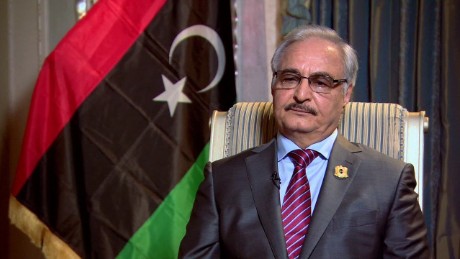 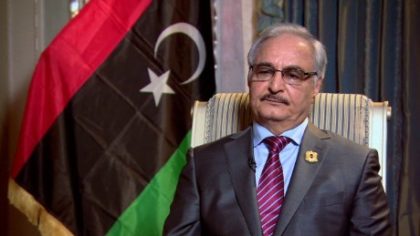 Khalifa Haftar, head of Libyan National Army (LNA) aligned with UN-back President Council (PC) rival government has lambasted claims that Russia has agreed to supply him weapons in despite the UN-imposed arm embargo.
Speaking to Russia’s Sputnik agency in an interview, the self-style army commander indicated that Moscow as it claims is not ready to resume arm supply to Libya due to the UN current embargo on the country since 2011.
Haftar has travelled several times to Moscow to negotiate arm purchase for the LNA. Sources and reports indicated that Russia intended to smuggle arms through Algeria or Egypt.
The Libyan army commander has become Russia’s mouth-piece in the Libyan crisis. Even though he has not yet received arm supplies, Haftar has also secured transfer of LNA injured fighters in Russia for treatment. Dozens of wounded have already been flown to Russia for treatment.
Haftar who claims to fight terrorism in Libya, has been fighting against terrorists in Benghazi and in the eastern part of the country.
He also noted that given the Russian refusal, the LNA could turn to any other supplier adding that it was logic as part of the fight against terrorism.
“This is logical. No one should deny it as we do not want to arm ourselves for aggressive purposes but only to defend and stabilize our country.”
He also denied in the interview that Russia has no plan to establish a military base in the oil-rich country given its “giant fleet in Mediterranean.”
Russia has been increasing in presence in Libya through the army commander. US military officials last month pointed out that Moscow was establishing in military base in Egypt near the Libyan border in other to have more influence on Libya.
Accused and decried by UN-backed and Tripoli-established PC, Haftar is increasingly becoming a major figure head in the political crisis.
After receiving a major boost early this week from the United Arab Emirate (UEA), Haftar also reportedly met with an unidentified Senior US military official in the Abu Dhabi. Reports say, the Emiratis arranged the meeting and tried to convince Americans to work with the Libya army commander as a key partner in the fight against terrorism in Libya and in the region.