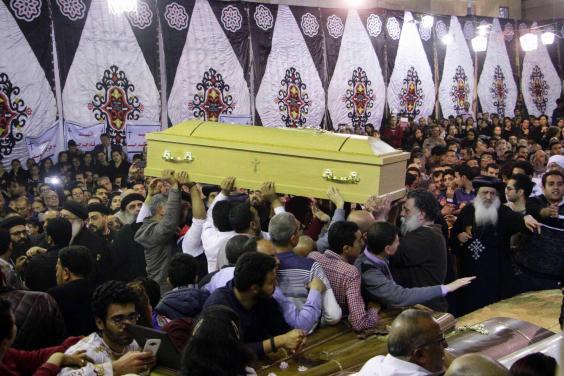 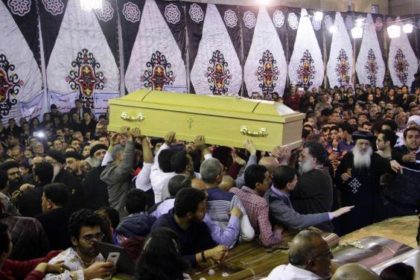 Egyptian President al-Sisi Thursday pledged that Palm Sunday Church bombers will not go scot-free as he visited Head of Coptic Christians.
The Egyptian leader paid a supportive visit to Pope Tawadros II days after Sunday bombings which left 45 people dead.
Two bomb attacks decimated Palm services in two Coptic Churches in Alexandria and in Tanta, north of Cairo.
Al-Sisi in a speech hours following the attacks announced a three-month state of emergency while also vowing to address terrorism in the country.
The interior ministry identified Mahmoud Hassan Mubarak Abdullah, 31-year old Suez resident as the subside bomber who blew up himself at Saint Mark’s Cathedral Church in Alexandria.
The ministry also that Abdullah had links with the Islamic State group (IS) which responsibility for the two attacks.
Authorities also said they are working to identify the Tanta attacker and as well as 19 other suspects believed in the connection with the attacks. A 100 thousand Egyptian pound ($5,515.72) reward has been promised for any information on them.
Al-Sisi’s support comes ahead of Pope Francis’s late April visit. The Head of the Roman Catholic Church has maintained his trip despite threats by IS for further attacks. The Vatican indicated that Cairo has promised to secure the Pope’s safe trip.