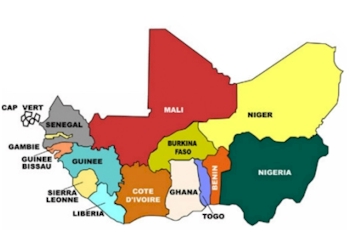 Morocco, on a Charm Offensive to Join ECOWAS

King Mohammed VI of Morocco sent messages with envoys to heads of state of the West African Economic Community (ECOWAS) which the Kingdom applied to join.

In this regards, Minister Delegate to foreign Affairs, Nasser Bourita handed Royal messages to the heads of state of Ghana, Nigeria, Mali and Gambia.

As part of the same diplomatic momentum to gather support for Morocco’s bid to join the ECOWAS, Foreign Minister Salaheddine Mezouar visited Dakar where he met Senegalese President Macky Sall before he travelled to Niger to hand a Royal message to President Mahamadou Issoufou.

Earlier this month, Morocco, which has an observer status in the ECOWAS and is bound by strong relations with its member states, has officially applied to become a fully-fledged member of the grouping.

Before submitting the bid to join the ECOWAS, King Mohammed VI visited several countries in the region where Morocco is one of the largest investors. Recently Morocco gave further substance to its south-south cooperation approach in the continent and sealed an agreement with Nigeria to build the Africa Atlantic Pipeline.

In his landmark speech in Addis Ababa on the occasion of Morocco’s return to AU, King Mohammed VI lauded the ECOWAS achievements saying that intra-regional trade has reached 10% between the member countries of the west African sub-region adding that this grouping offers “a reliable space for free movement of persons, goods and capital.”