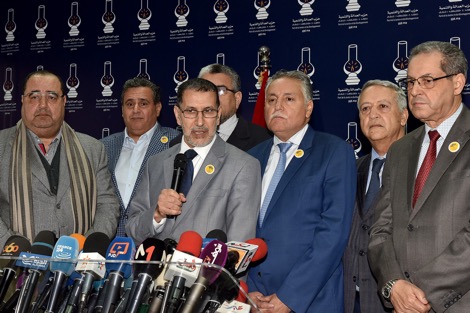 Saad Eddine El Othmani, Head of the Government designate and president of the National Council of the Islamist PJD party announced the composition of the new government coalition after an impasse that left Morocco without a cabinet for more than five months. The announcement was made by El Othmani at a press conference Saturday. The leaders of the participating parties in the government coalition: Liberal RNI and UC, traditionalist MP and socialist PPS and USFP attended the press conference.

El Othmani, who was appointed Head of Government and tasked with forming the new Cabinet nine days ago has broken away with the rhetoric and the stands of his predecessor, the PJD Secretary General Abdelilah Benkirane.

Head of the government designate said that a joint committee will be formed bringing together representatives from the parties of the governmental coalition to draft a governmental program in line with the large-scale reforms launched in Morocco notably upgrading administration, improving services such as education, health and employment, fighting corruption and bolstering Morocco’s African policy.

During the negotiations led by Benkirane, the main obstacle was admitting the USFP to the government. The RNI conditioned its participation in the new cabinet with the inclusion of three parties with minor results: the UC, the MP and the USFP. Benkirane refused to let the USFP in accusing it of sabotaging negotiations. He argued that a USFP leader was elected speaker of the Parliament and that is enough for a party with only 20 seats in parliament.