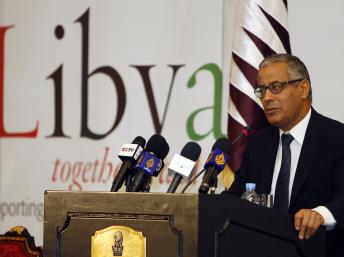 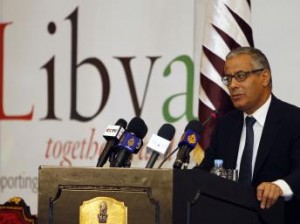 Libyan Prime Minister Ali Zaidan Tuesday survived an attack by a group of armed men in the city of al-Baida, about 200km east of Benghazi, local media reported.
Members of the armed group, reportedly the Ali Hassan Al-Jaber brigade, attacked the building where the Prime Minister was due to hold a meeting with members of the local council of the city and smashed the vehicles that were in his convoy.
Security agents managed to get the Prime Minister and his accompanying delegation out of the building safely.
The reasons of the attack were not yet clear, but according to local sources, the mob was protesting the venue of the meeting that was to be held on the periphery of the city and not in one of the meeting halls downtown, where the officials visiting from Tripoli could have a clearer idea of the problems and hardships of the population.
Some analysts have also explained the attack by the anger and resentment of the citizens living in the eastern regions of Libya who feel that the central government pays no heed to their grievances and has not so far addressed their needs.
The Prime Minister was visiting al-Baida, part of a tour of Eastern Libya that had already taken him to Derna and Tobruk where he met local council members and local leaders.
The prime minister’s talks with the local officials covered the problems facing the cities in matters of housing, infrastructure, and social services as well as border control, illegal immigration and weapons smuggling.
His meeting in Tobruk, a strategically and geographically important town, was also disrupted by protesters who had previously threatened to occupy the oil refinery and cut the oil flow in protest at months of unpaid salaries. However, citizens in general welcomed his promise to develop the city’s infrastructure, mainly the sea and airport facilities.
CATEGORIES FeaturesHeadlinesLibya
Share This