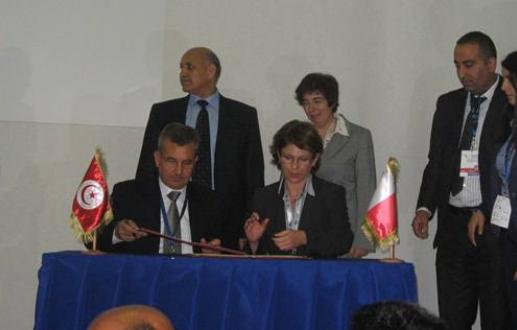 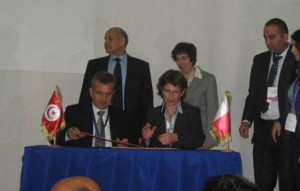 A Maltese business delegation has ended its visit to Tunisia and the meetings of the delegates with their Tunisian counterparts have already been described as a success.
The visit which was organized by Malta Enterprise# in collaboration with the Maltese embassy in Tunis gave thirteen Maltese companies operating in a wide range of sectors including renewable energy, pharmaceutical industry, construction and architectural sector, information computer and technology, packaging, plastic and tobacco the opportunity to visit the CAT Business and Technology Convention at the International Fair Compound in Tunis. The fair was marked by the signing of a Memorandum of Understanding on mutual cooperation between Malta Enterprise and the Tunisian Foreign Investment Promotion Agency, FIPA
More than 300 Tunisian exhibitors took part in the three-day ‘CAT 2012’ fair which also registered the participation of more than 800 foreign firms located mainly in Europe, the Middle East and Africa. Various countries organized pavilions to represent business and projects that are being carried out through collaboration either between governments or private industry.
In their quest to promote trade between the countries, meetings were held to bring together the two sides in order to favor trade contacts, boost partnership and business and the discovery of new markets. Mr. Kies Ali, an external consultant of the African Development Bank was invited by the Embassy of Malta to provide an overview of the business environment in Africa and Tunisia, in order to outline the various opportunities that could be exploited by Maltese companies seeking to expand throughout the Mediterranean and in other nearby markets in sub-Saharan Africa.
Relationships between the two parties are to be developed further in the near future.