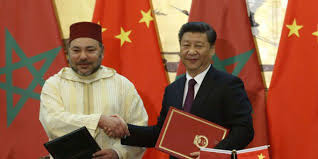 Mr Du Qinglin, vice chairman of the National Committee of the Chinese People’s Political Consultative Conference, paid tribute on Monday in Rabat to King Mohammed VI for the efforts made by the Sovereign for socioeconomic development and for peace in the region.

The Chinese official, who is visiting the North African Kingdom, met Head of Moroccan Government Abdelilah Benkirane and Speakers of the two Chambers of the Moroccan Parliament.

Following his talks with Speaker of the Parliament upper Chamber Hakim Benchamas, the Chinese official described as “very successful” the visit paid last June by King Mohammed VI to Beijing.

“The royal visit opened up for the two countries new horizons to usher in and deploy exemplary partnership globally”, said Mr. Du Qinglin, noting that Morocco is one of China’s main partners in Africa and the Arab world.

For his part, Mr. Hakim Benchamas called for setting up an inter-Parliamentary Moroccan-Chinese forum to foster further the special bilateral relations binding the two countries.

In a bid to boost Moroccan-Chinese cooperation, King Mohammed VI gave instructions for the abolition of entry visas for Chinese nationals as of June 2016.

The move, made during the royal visit to Beijing, confirms the Sovereign’s vision and his commitment to deepen and diversify Moroccan-Chinese relations. It shows also Morocco’s determination to intensify human, cultural, economic and political relations between the two long-time friends and partners.

King Mohammed VI and President Xi Jinping have voiced commitment to the strategic partnership between Beijing and Rabat. The two leaders also presided over the signing ceremony of some 15 agreements and memoranda of understanding, all meant to boost cooperation between the two countries in all sectors.

North Africa Post's news desk is composed of journalists and editors, who are constantly working to provide new and accurate stories to NAP readers.
NEWER POSTOceans’ Protection, at Heart of COP22 Agenda
OLDER POSTMorocco: March in Casablanca against Instrumentalization of Islam in Politics