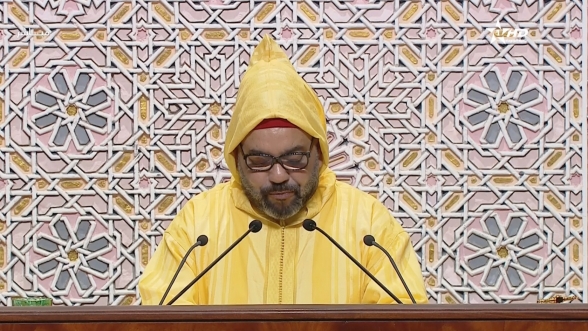 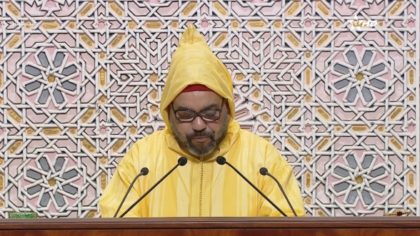 King Mohammed VI on Friday urged the Moroccan banking and financial sector to be more involved in the country’s development process, mainly through simplifying and facilitating access to loans, being more open to self-employment projects and financing the creation of small and medium sized enterprises.

“Implementing projects and decisions, and ensuring follow-up to them, involves more than just the signing of contracts and agreements. It is, above all, a moral contract involving reason as much as conscience,” said King Mohammed VI in a speech marking the opening of the fall session of the parliament.

In his address, the Monarch focused on the role the banking and financial sector can play particularly with regard to financing investment projects and supporting productive activities that create jobs and generate income.

The Monarch underlined that Morocco’s banking sector is “vibrant and robust” and contributes to the resilience and development of Moroccan economy and that the fact that Morocco’s financial system is subject to strict regulatory controls undertaken by independent and competent national institutions “enhances trust in our banking sector and reinforces its credibility, both domestically and abroad.

Nevertheless, he noted, several segments of society still have a negative perception of the banking sector, as if banks were only interested in quick, guaranteed profit.

Insisting that the banking and financial sector is at the center of any development endeavor, the King underscored the difficulties facing young entrepreneurs in obtaining loans, as well as the limited financial support provided to graduates and to those who want to create SMEs.

The Monarch who recognized that it is difficult to change certain mind-sets within the banking sector that impede development and investment, urged the Moroccan banking sector “to show greater commitment and to be more effectively involved in the country’s development dynamic, particularly with regard to financing investment projects and support for productive activities that create jobs and generate income.”

“In this respect, and in addition to the financial support they give to large businesses and companies, I am calling on banks to play a greater social role in promoting development, especially by simplifying and facilitating access to loans, by being more open to self-employment projects and by financing the creation of small and medium sized enterprises.”

To this end, the King asked the government and the Moroccan Central Bank to coordinate with the Professional Group of Moroccan Banks in order to develop a special program to provide financial support to young graduates and fund small self-employment projects.

He recalled that a number of institutions have had a successful experience in financing projects developed by young people and facilitating their integration into social and professional life.

“Such projects have had a positive impact on the young people concerned, their families and the community.”

The special financial support program that the King vowed to monitor along with the government and the parties concerned, should enable as many young, qualified project holders as possible, from various social backgrounds, to obtain bank loans and assistance in order to launch their projects.

The program should also focus on giving financial support to export-oriented small and medium-sized enterprises, especially those trading with Africa, and enable them to benefit from the value added offered by the national economy, the Monarch said, urging to facilitate public access to banking services and to opportunities for professional and economic integration, particularly for people involved in the informal sector.

Insisting again that economic activity hinges mostly on the development of banking services, the Monarch welcomed the results achieved in this area over the past two decades, given that the number of citizens who opened a bank account has increased threefold.