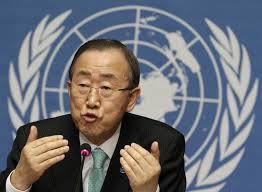 The Moroccan government has decided to significantly scale down the civilian component of MINURSO, to put off its voluntary contribution to the functioning of MINURSO and to consider the withdrawal of Moroccan blue helmets engaged in peacekeeping operations.

According to the Foreign Affairs Ministry of the North African country, these measures have been taken in response to inappropriate remarks made lately by the UN Secretary-General Ban Ki-moon on the Sahara issue.

Following Ban’s “unacceptable” comments and outrageous behavior, Morocco says it “reserves the legitimate right to resort to other measures that may be required, to defend, in strict line with the UN Charter, its supreme interests, sovereignty and integrity territorial.”

During this meeting, Mezouar expressed to Ban ki-moon Morocco’s total rejection of his remarks regarding the Sahara issue during his recent visit to Algeria.

“Moroccan authorities consider that such acts are incompatible with the responsibilities and the mission of the Secretary-General that compel him to a duty of objectivity and impartiality and to the respect of the framework established by the UN bodies,” says a statement released by the Moroccan Foreign Affairs Department.

The term “occupation” used by Ban Ki-moon to describe the presence of Morocco in its Sahara is a “serious political mistake,” adds the document, noting that no UN Security Council resolution ever used such an offensive word.

Morocco also urged the UN chief to avoid any attempt aimed at undermining the Moroccan autonomy initiative and clarify his positions in a bid “to restore a climate of trust and mutual respect”.