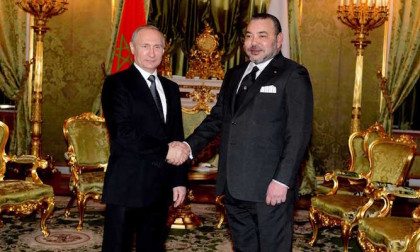 Russia has joined its voice to Morocco’s to express opposition to any violation of the parameters set by the United Nations Security Council with regard to the settlement of the Sahara issue and to any attempt to change the pace of the political process.

This came in the Statement on the Extended Strategic Partnership adopted by Russia and Morocco on the occasion of the official visit of King Mohammed VI to Moscow.

“The Russian Federation and the Kingdom of Morocco do not back any temptation for acceleration or precipitation of the political process, nor any violation of the parameters already defined in the Security Council resolutions” in search for a solution to the Sahara issue said the Statement on the Extended Strategic Partnership released Tuesday following the talks held at the Kremlin by King Mohammed VI and President Vladimir Putin.

Russia also said that it “takes due account” of Morocco’s position regarding the settlement of the Sahara issue and “takes note of the socio-economic projects launched to develop the territory and improve the living conditions of the people living there,” said the Statement.

The Statement on the Extended Strategic Partnership also outlines that the two countries agreed to contribute to peace and to regional and international stability, to work for the defense and preservation of strategic interests of both countries within the framework of solidarity and consultation.

They likewise pledge to preserve the territorial integrity of the two States and consolidate their unity and to develop actions of cooperation and partnership on all their territories.

Also, the Statement underlines that the two countries attach great importance to the Sahara-Sahel region in the context of the security system of the African continent, and plead for the implementation of the UN Integrated Strategy for the Sahel.

For Morocco and Russia, their Extended Strategic Partnership is a positive and constructive contribution to strengthening regional and international stability.