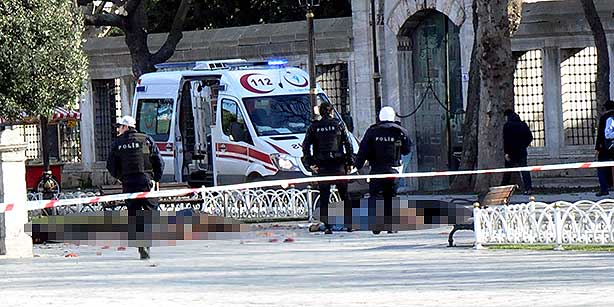 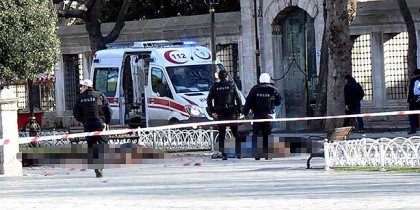 A bomb blast rocked Tuesday morning the Turkish largest city of Istanbul killing at least 10 people and wounding 15 at the city’s historic square of Sultanahmet, early reports say.
The blast was confirmed by the Istanbul government official website. According to reports, the blast occurred at around 10:15 local time near Obelisk of Theodosius in the square, a very popular touristic place.
10 people have been reported dead while 15 have been registered wounded, lying on the ground. Witnesses told reporters that explosion which may have been caused by a suicide bomber was loud and heard at nearby districts.
“The explosion was very loud. We shook a lot. We ran out and saw body parts,” one woman working at a nearby antiques store reportedly told a Reuters correspondent, declining to give her name.
Security forces have sealed off the area and have prevented entry fearing a second blast.
Ambulances rushed to the scene and ferried wounded to nearby hospitals for treatment.
Tram traffic between Beyazıt and Eminönü has been suspended and the square has been closed to traffic, according to reports.
Prime Minister Ahmet Davutoğlu has convened Interior Minister Efkan Ala to discuss the attack.
No one has claimed responsibility for the attack yet but Turkey has been facing insurgency from PKK Kurdish fighters who have stepped up attacks.
IS militants have also perpetrated attacks in Turkey following Ankara’s crackdown on the Islamic group. Last year IS claimed two terrorist attacks in the town of Suruç near the Syrian border and in the capital Ankara.
Also last week, Turkish media reported that two IS militants who were arrested in December last year in Ankara on terrorist act allegations confessed to security forces that they were ordered to attack state institutions including Parliament and courthouses.