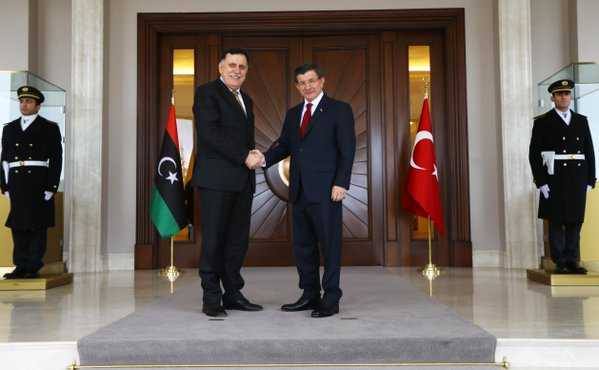 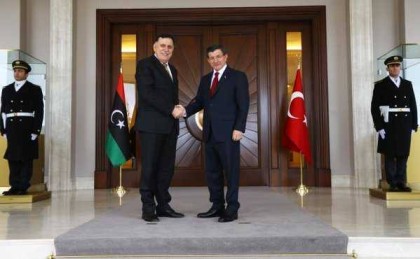 Turkish Prime Minister Ahmet Davutoğlu Monday threw Ankara’s support behind the Libyan Government of National Accord (GNA) in a meeting with Faiez Serraj, Libya’s unity government Prime Minister-designate, reports say.
Prime Minister Davutoğlu according to Turkish reports relayed by Libya’s “Libya Herald” is very concerned by Libya’s unity and security and deems that the GNA could help the country restore its stability. It is also reported that Ankara pledged to support Libya’s reconstruction.
Prime Minister Davutoğlu according to Libya Herald also congratulated his Libyan counter-part Serraj for his appointment at the head of the GNA.
Turkey is among 17 countries which pledged support for the Libyan Dialogue Accord. Ankara and Doha have been accused of supporting unrecognized Tripoli-based Libyan administration and allied parliament General National Congress (GNC) firmly opposed to the Libyan Political Accord (LPA) and have also stood in the way of the formation of the GNA.
Though Prime Minister Serraj is member of the GNC, his government has been criticized by Tripoli strongmen who doubt the true ideology of the GNA which it brands as a puppet of the West.
Further reports indicate that Serraj who was back to Tunis the same day, is expected to appoint on Saturday remaining members of the GNA who will be introduced to Libyan internationally recognized House of Representative (HoR) parliament which will rubber-stamp the names.
The GNA will start its full operation upon official endorsement by the HoR which has been delaying dues lingering opposition by some its members.
Libya has slid into chaos since 2011 following the death of Col. Gaddafi deposed and killed in a NATO-backed uprising. Since then the country has been theater of rivalries between the HoR and GNA and their affiliated governments.
The rivalries have also led to the fostering of terrorist organizations and criminal networks which have developed unperturbed migrant smuggling networks sending waves of rickety boats fully of migrants in direction to Europe in search of a better life.