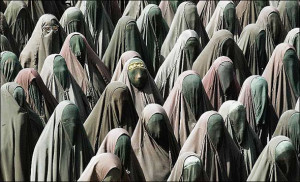 The Pew Research Centre has recently compiled the results of its research on the opinions of people in different countries across the MENA region on the way women dress. Respondents from seven MENA countries – Tunisia, Egypt, Turkey, Iraq, Lebanon, Pakistan, and Saudi Arabia – were asked which of the six styles of Muslim women’s clothing they found appropriate. The styles included a full burqa, mostly associated with Afghanistan, niqab, most commonly seen in Saudi Arabia, chador, often connected to conservative branches of Shiite Islam, al-mira, most typical in Muslim communities around the world, a simple head scarf, and no head covering at all.
The country which endorsed a hijab-free fashion for women were Lebanon, where about a fourth of population is Christian, and Turkey, where the divide between religion and secularism has been drawn sharply. In Tunisia, 15 percent of respondents opted for no head covering which is to some degree a legacy of several decades of secular dictatorship. Otherwise, not many other MENA countries embraced this option. In contrast, the countries which call for strict opposition to the hijab-free style, considered as the most conservative type of clothing, are Saudi Arabia and Pakistan. Pakistanis are divided between chador and niqab, while 11 percent of Saudi Arabians preferred the full burqa style.
The majority of the votes were divided between al-mira and a simple headscarf. While not being secular, these two types refer to a relatively liberal and open part of MENA societies. Interestingly, many Pakistanis and Egyptians chose one of the two options which may suggest, at least in case of the former, that a society could be divided between religious conservatism and liberalism. Moreover, the study also asked respondents whether they think women have the right to choose the way they dress. About half of the respondents in Tunisia, Turkey, and Lebanon said women should be able to make their own choices in clothing, while only 14 percent of Egyptians and 22 percent of Pakistanis agreed.
Though its results are undoubtedly both revealing and interesting, the main problem of this study is that it does not distinguish between female and male voters, and also does not consider the religious affiliation of the respondents. These factors might have to a certain degree lead to somewhat inconsistent and biased results.