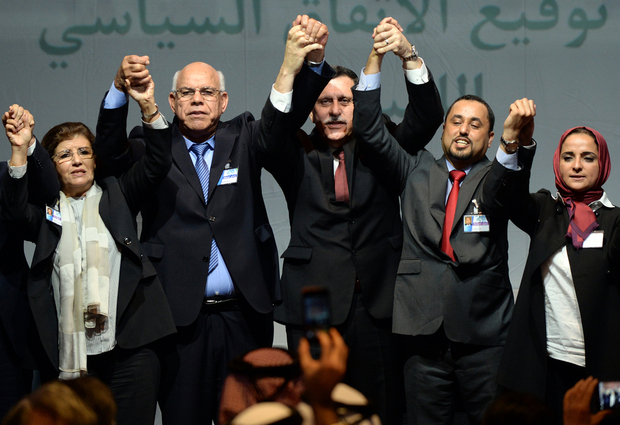 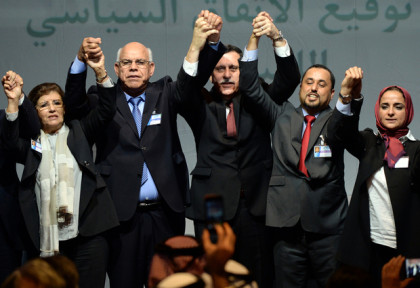 Libya turned a new page of its dialogue process Thursday as rival political factions and other political figures endorsed in Morocco the Government of National Accord agreement following a long and hesitant process peppered with disagreements still fostered by the hardliners and a fringe of “spoilers.”
Emhimmed Shoaib from the House of Representatives (HoR) and Saleh Al-Makhzoum, former Second Deputy President of the General National Congress (GNC) in Tripoli both in favor of the agreement also signed on the dotted line.
The signing was praised by the UN, EU and the Arab League.
The Head of the UN mission for Libya Martine Kobler hailed the signing as an historic day before adding that even though it marks the end of a process, it also gives the signal for another long journey given the wide divisions and rifts among groups.
He congratulated and also urged the new government to immediately take action to address the pressing issues tormenting Libya now, its unity, stability, humanitarian crisis and the overriding issue of terrorism at the center of which the Islamic State (IS) enjoying freeway due to absence of a central government to tackle it.
“This is just the beginning of a long journey for Libya. Signing is only the first step on the road to putting Libya back on the right track,” Kobler said.
“I congratulate the new Prime Minister Fayez Sarraj, but I also must say I don’t envy you; there a heavy workload in front of the government and the United Nations stands ready to assist you to support and to accompany you on this way.
There is first the national reconciliation in the country, there is second the security situation in and I encourage an inclusive national security dialogue as soon as possible,” he added
“There is the problem of terrorism and the fight against Daesh; this has to be addressed on an urgent basis.”
Kobler’s diplomatic achievement and the Libyan people’s consensus also received the praises from the European Union and the Arab League which congratulated the protagonists for their bold step in direction towards peace and progress.
As Kobler warned the new deal is facing strong fragmentation as the Head of rival factions, Nouri Abusahmein from the GNC and Aguila Saleh of the HoR refused to bless the accord saying that he who signs it is not mandated to do so on behalf of the either group.
Meanwhile other reported developments indicated that some US special unit which arrived in Libya on Monday at Al-Wattiyah Airbase controlled by Libya’s internationally recognized government has been forces to leave immediately.
The Pentagon acknowledged that a special US squad said to “foster relationships” with the Libyan army was kicked out Libya.
A US official speaking under condition of anonymity told reporters that troop arrived in Libya with the consent of the Libyan authorities.