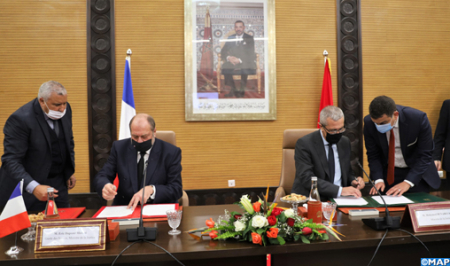 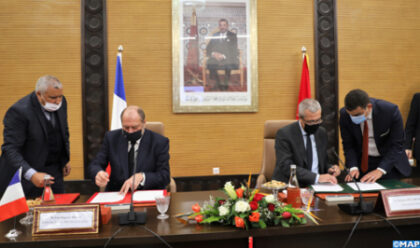 Morocco and France signed, Monday in Rabat, an agreement, known as Declaration of Intent, relating to unaccompanied minors.

The agreement, initialed by the Moroccan and French Ministers of Justice, Mohamed Benabdelkader and Eric Dupond-Moretti, who is on a visit to the Kingdom, concerns the dissemination of a procedural outline, which details the process of management of the situation of Moroccan unaccompanied minors in France.

The agreement does not clearly refer to the repatriation of these unaccompanied minors who are in an irregular situation in France, and does not explain the conditions governing possible expulsions.

This is a text that would pave the way for mutual cooperation between departments and magistrates, about the protection of this category of children, a Moroccan source, close to dossier was quoted by the news outlet le360.ma as saying.

According to the French Minister of Justice, the agreement is meant to “manage” the problem of unaccompanied minors and particularly to identify these minors “with a view to a [probable] repatriation”.

As for Mohammed Benabdelkader, he explained that “the agreement is based on a series of measures determining the legislative framework under which the defenders of the rights of minors will act”, alluding to magistrates, public prosecutors, and social workers.

“This document will outline a framework for cooperation in accordance with the United Nations convention,” Benabdelkader said.

The text thus provides French juvenile magistrates with essential information that enables them to take the most appropriate measures in the best interest of the concerned children.

The agreement will also ease the exchange of information and will help put in place concrete tools capable of solving a problem common to the two countries, said Dupond-Moretti, noting that the protection of minors is a priority for both Morocco and France.

The French official thanked, in this regard, the Moroccan authorities “for the precious help they have given us, particularly for the identification of unaccompanied minors, because without identification, no legal action can be possible”.

Moroccan cooperation, he stressed, enabled the French authorities to realize that “many of those who declared themselves to be minors were in fact of legal age and that Moroccan nationals, contrary to what is sometimes wrongly claimed, were not the most numerous ones”.

Dupond-Moretti stressed that his visit to Morocco, which is his first official international trip since his appointment as Justice Minister, is of particular importance for him in view of the very close relations and deep ties between the two countries, underlining the “long-standing exceptional partnership” between the two judicial authorities.

This partnership, he underlined, is strengthened by regular exchanges in terms of training of magistrates and staff of the registries and modernization of justice, as well as by the “particularly effective and diligent treatment of the Moroccan authorities of our requests regarding mutual criminal assistance which represents for us the most important flow outside the EU.”

The Monday meeting was an opportunity for the two sides to review the various aspects of Moroccan-French cooperation in the field of justice and to make “a positive, satisfactory and promising assessment,” the Moroccan Justice Minister said.

An in-depth exchange on the perspectives of this cooperation over the next two years was also on the menu of discussions, he said, reiterating the common will of the two countries to further strengthen this partnership through several initiatives and mechanisms, including within the framework of the Declaration of Intent on the treatment of unaccompanied minors.

The French Justice Minister is expected to meet several other Moroccan officials during his two-day official visit to Morocco.

North Africa Post's news desk is composed of journalists and editors, who are constantly working to provide new and accurate stories to NAP readers.
NEWER POSTMorocco aims to reduce energy consumption by 20%
OLDER POSTSouth African President deals a blow to the Polisario