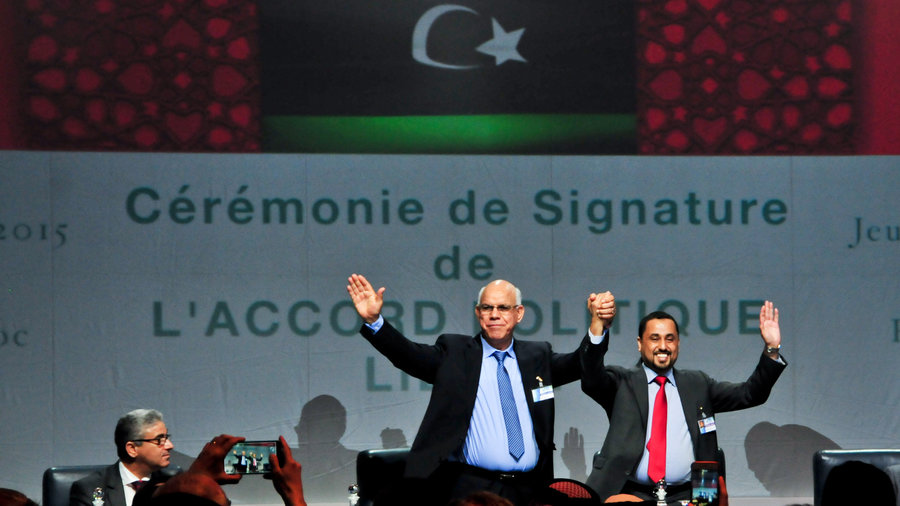 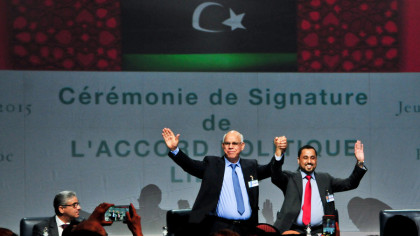 A political agreement between Libya’s rival parliament was signed in Morocco on Thursday but there are still concerns about its implementation because it is not backed by the presidents of the two parliaments, Nouri Abusahmain of the General National Congress (GNC) in Tripoli and Aguila Saleh Issa of the House of Representative (HoR) in Tobruk, as they stated on Tuesday that they had not authorized anyone to sign the agreement on their behalf after their first meeting in Malta.
U.N special envoy Martin Kobler said the signing of the agreement by “participants in the Libyan political dialogue” showed that “Libya is restarting its political transition” marking the end of “political divisions and conflict.” AFP news agency reported that around 80 of 188 members of the HoR and 50 of the GNC’s 136 members signed the agreement. Kobler admitted that the signing ceremony “is the beginning of a difficult journey” citing the need for “a critical need for national reconciliation.”
Salah Al-Mahzoum, GNC’s deputy speaker, said they have started to “rebuild the Libyan State” with the agreement but his aspirations might be dampened by Abusahmain who stressed in parliament that “whoever has not been commissioned by the GNC to sign or initial a deal on its behalf is, and will remain, without legitimacy.” The GNC President criticized the U.N-led agreement saying it “is not the subject of consensus (of Libyans) and does not even guarantee the minimum required to ensure its effectiveness.”
General Khalifah Haftar after a meeting with Kobler on Wednesday urged for the arms embargo to be lifted for the “Libyan army… to carry out our roper role” hinting that “dialogue cannot continue as it did in the past without any benefit. Otherwise it’s a waste of time.”

North Africa Post's news desk is composed of journalists and editors, who are constantly working to provide new and accurate stories to NAP readers.
NEWER POSTLibya: Political protagonists sign GNA agreement amid rejection from hardliners
OLDER POSTMorocco: 3 soldiers sentenced to three years in prison for possession of IS flag