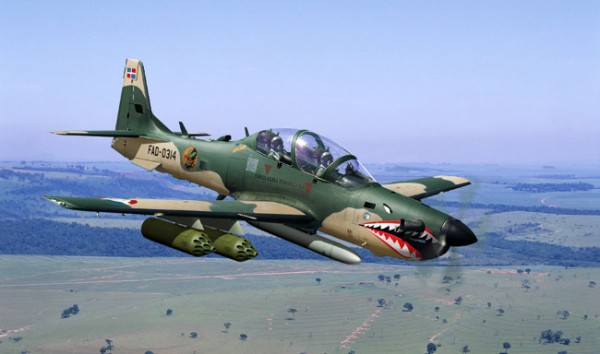 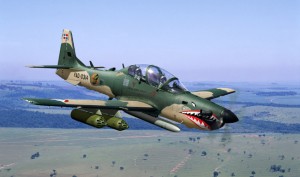 Mauritanian Air Force has received its first Brazilian-made Super Tucano jet fighter under a military deal passed last march with the aircraft manufacturer Embraer, without saying how many planes will be delivered to the African nation.
However, some foreign diplomatic and intelligence sources say that Mauritania will be supplied at least three EMB-314 Super Tucano light military planes which can be used for pilot training, reconnaissance, internal security, border patrol and counter-terrorism and anti-narcotics trafficking missions.
Equipped with an advanced laser inertial navigation and attack system, a GPS and a traffic alerting and collision avoidance system (TCAS), the Super Tucano has an integrated advanced weapon system. This includes  a centerline hard-point for air-to-surface weapons beneath the fuselage, besides wing-embedded cannons.
The aircraft also includes the Safire thermal imaging system from FLIR, which allows the aircraft to carry out night surveillance and attack missions. Powered by a PT6A-68A turboprop engine developing 969kW, the aircraft can fly at a maximum speed of 560km/h. It is also capable of operating from remote bases and unpaved runways.
Designed to operate in high temperature and humidity conditions in extremely rugged terrain, the Super Tucano is highly maneuverable, has a low heat signature, and incorporates 4th generation avionics and weapons systems. It is currently used by the air forces of Brazil, Dominican Republic, Colombia, Ecuador, Chile, Burkina Faso, Indonesia, and has been ordered by the armies of Guatemala and Angola.
Mauritania, which has a population of 3.5 million, is facing growing terrorist threats in the Sahel region which has become a safe haven for organized crime and terrorist networks.
After the Islamist extremists took control of Northern Mali, thousands of refugees fled into Mauritania, placing additional strain on resources as the country is itself rocked by internal turmoil and struggling with a food crisis engulfing the whole Sahel region.

North Africa Post's news desk is composed of journalists and editors, who are constantly working to provide new and accurate stories to NAP readers.
NEWER POSTAlgeria to Enforce New Law on Food Additives by May 2013
OLDER POSTEgypt Seeks $2 billion Assistance from Algeria