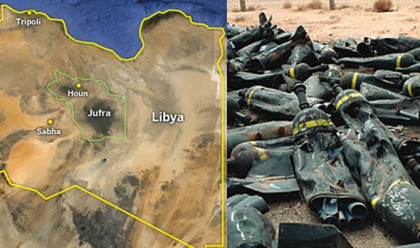 Some of Libya’s chemical weapons have been taken by armed men who stormed the chemical factory in Jufra district where they are stored. The amount taken by the armed men is unknown but fears already exist that they could find their way to militants loyal to ISIS. Military sources who spoke to the media stated that among the chemical weapons are mustard gas and sarin gas.

An official in the Libyan military said places where the chemical weapons are being stored in the country are known to the militias. He said that the militias went away with large amounts of chemical weapons and could use them in their war against the Libyan army. The army supports the government in Tobruk and has been fighting with the militants backing the Tripoli government and the Islamist groups in the country.

No group has claimed responsibility for the attack on the chemical factory located 600 kilometers southeast of Tripoli. An eye witness said the militias drove off with the chemical weapons in cone-shaped tanks. There are also fears that the attack might lead to a chemical weapon-rush in the country as the war continues to be a stalemate.

A military source hinted that the country was having around one thousand cubic tons worth of material used for manufacturing chemical weapons and about 20,000 cubic tons of mustard gas before Gaddafi was killed in October 2011. The destruction of some of Libya’s chemical weapons arsenal began after the country joined the Chemical Weapons Convention in 2004.

Asharq Al Awsat claimed that it has seen a video which seems to show militants testing what could be chemical weapons in a mountainous area near the town of Mizda, 160 kilometers south of Tripoli.