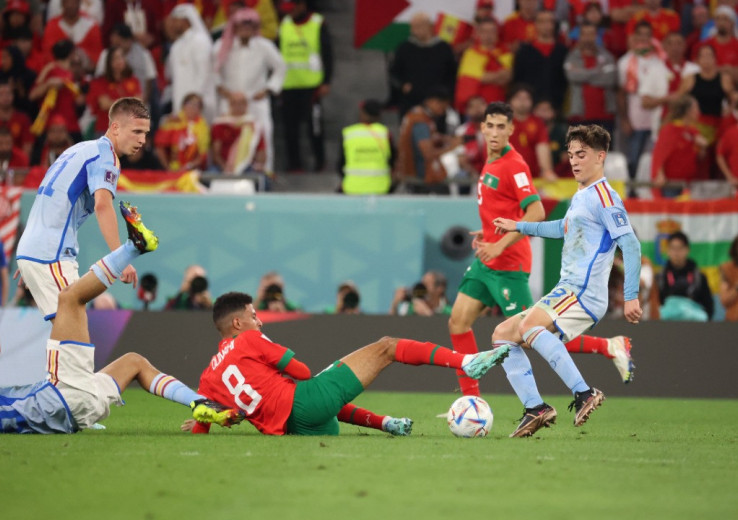 Morocco knock out Spain on penalties in an historic match, cruises to World Cup Quaterfinals

Morocco have qualified for the quarterfinals of the Qatar-2022 World Cup, beating Spain in a penalty shootout 3-0 on Tuesday at the Education City stadium in Doha.

The two teams were unable to separate after regulation time and extra time (0-0).

Morocco, on a scoring streak, progressed to the round of 16 after an amazing first phase of the World Cup. The North African team ended the group stage with seven points, top of the group, with four goals scored and just one conceded. Victory over Canada sealed their passage, but a 2-0 win over third-placed Belgium at the Russia 2018 World Cup was the backbone of their bid to make history in Qatar. Now, Morocco is the only Arab and African country left in the tournament.

Morocco’s national football team has managed to unite Arabs better than any Arab league summit as social media is awash with videos from different Arab countries including war-torn Syria and besieged Gaza showing football lovers in cafes gathering to cheer for Morocco.

In Doha, the stadiums in all Morocco’s games were filled with Moroccan fans. For this game against Spain, demand for tickets by Moroccans exceeded the offer with many left waiting outside the stadium while thousands chanted and cheered non-stop in Doha fan zones and streets.

Arabs and Africans have now Morocco to support as it continues its fighting spirit led by national coach Walid Regragui, on whom Moroccans pin hopes to outperform the best performance they had so far in a World Cup 36 years ago in Mexico.

The Atlas Lions have done it. Moroccan defenders as well as their goalkeeper deserve their win which sparked spontaneous scenes of celebration across the North African Kingdom and in world capitals hosting the Moroccan diaspora.